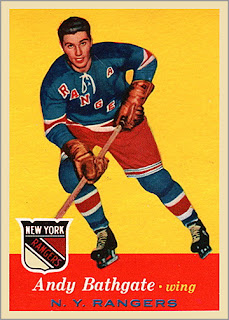 Andy Bathgate retired in 1975 and passed away a couple years ago, but there is a certain five year old in Vancouver who is in love with the guy.

I love visiting my twin nephews in Vancouver. They're so much fun to be around, even though they live in a non-hockey family.

Yeah, my brother was never as cool as me.

I asked him if he knew who number 9 was. When he said he did not know, I told him it was Andy Bathgate! Ever since Andy Bathgate has been the kid's favorite player.

The kid and his dad were at a restaurant the other day. It must have been a cool restaurant because they were showing the Capitals/Lightning playoff game on the TV. The little guy was watching the big screen and ask his dad, "Which one is Andy Bathgate?"

There's hope for this kid! I'm so proud.

Now if I can only get the kid to remember that number seven is Phil Esposito.
at May 19, 2018