The storybook season for the Vegas Golden Knights will end with a chapter dedicated to the Stanley Cup Final as the expansion club earned its fourth consecutive win to become the sixth team in NHL history to reach the Final in their first-ever trip to the postseason and third to do so in their inaugural campaign. 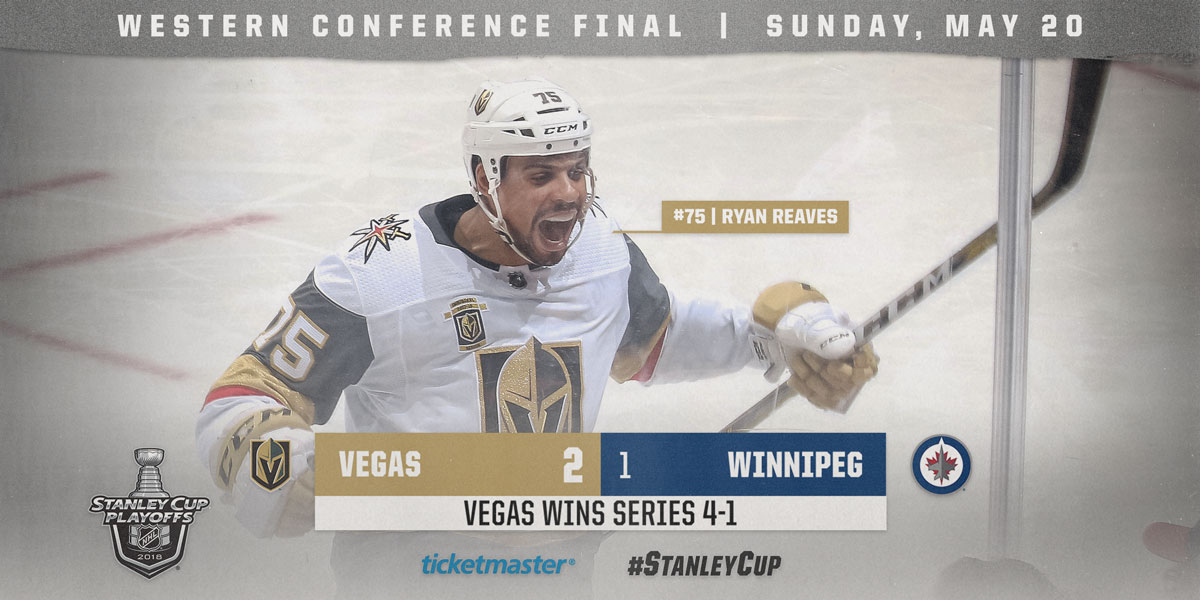 HISTORIC RUN CONTINUES AS GOLDEN KNIGHTS REACH STANLEY CUP FINAL
Three-time Stanley Cup champion Marc-Andre Fleury made 31 saves – and stopped all 19 shots he faced over the last 40 minutes – to backstop the expansion Golden Knights to another series-clinching road victory in Game 5 against the Jets.
* In the last 50 years, only one other club from either the NHL, MLB, NBA or NFL/AFL reached the championship series or game in its inaugural season – the Blues represented the all-expansion West Division in the 1968 Stanley Cup Final. Find more historic comparisons below. 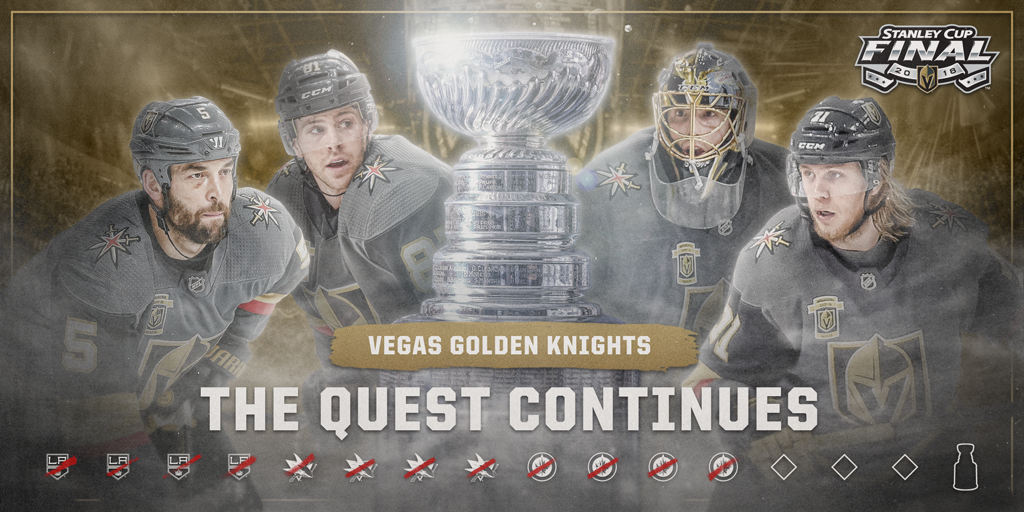 * The Golden Knights became the seventh team in NHL history to reach the Stanley Cup Final after recording three series-clinching wins on the road. Five of the previous six went on to win the Stanley Cup. ICYMI: Fans back in Las Vegas gathered for a watch party outside T-Mobile Arena, just as they did when their club advanced with wins in Los Angeles and San Jose.
* This is the third consecutive year that a team will make its debut in the Stanley Cup Final. Debutant teams own an all-time series record of 11-17 in the Final, with the last three instances ending in defeat – the Sharks (2016) and Predators (2017) both lost in six games to the Penguins, while the Senators (2007) lost in five games to the Ducks. The Lightning (2004) were the last team to win the Stanley Cup in their first trip to the Final.

* The Golden Knights (12-3) became the 13th team to win at least 12 of 15 games to begin a postseason since 1986-87 when the Stanley Cup Playoffs became a four-round, best-of-seven format. Four of the previous 12 clubs went on to win the Cup (the three listed below and the 1993 Canadiens). 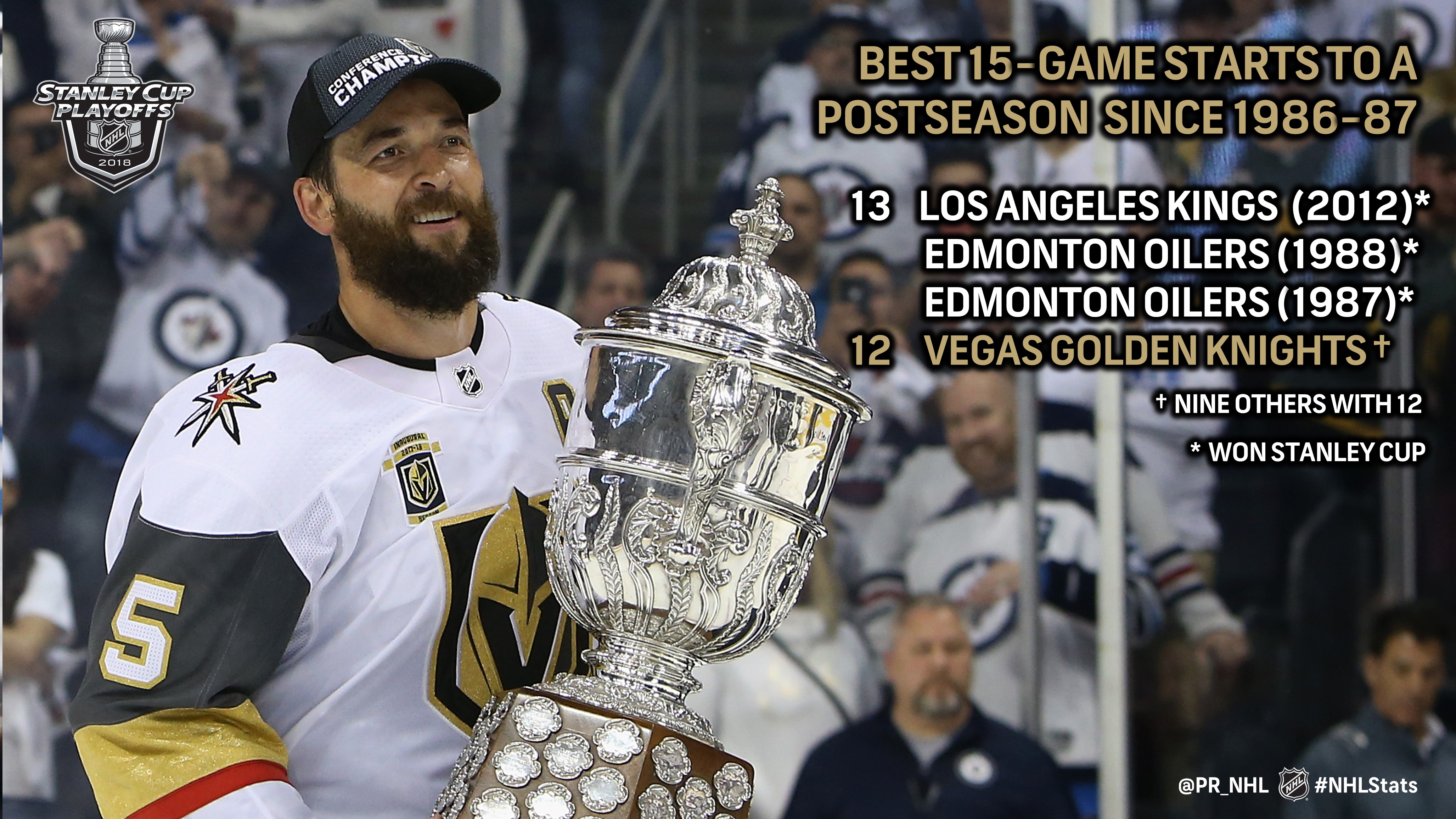 * Vegas became the 20th team to post four straight wins in the Conference Finals/Semifinals and just the seventh to do so after losing Game 1 (since 1974-75). Tampa Bay can achieve both feats tonight as they aim to become just the third team to overcome a 2-0 series deficit to advance into the Final. 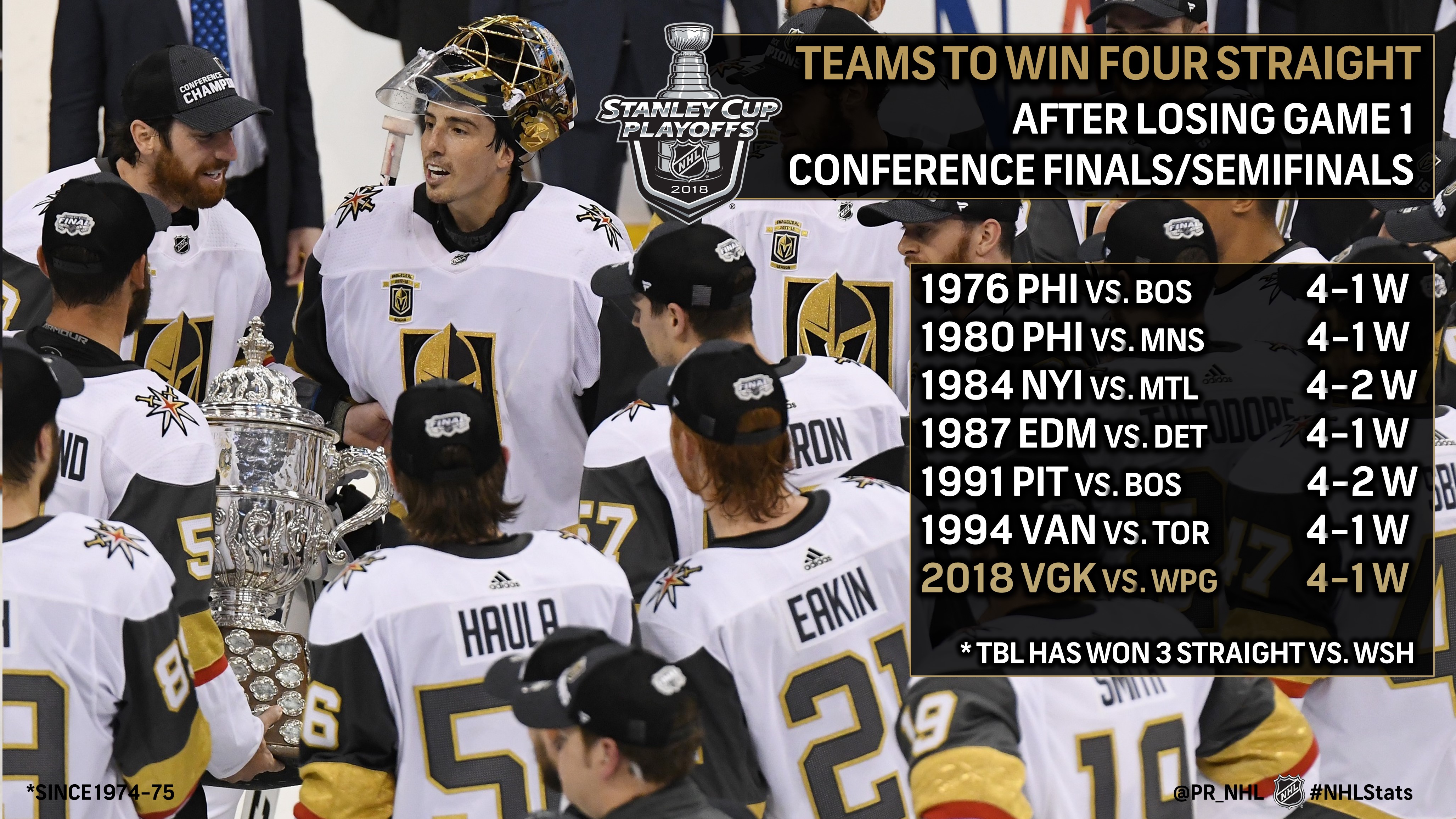 VEGAS JOINS ELITE GROUP IN PROFESSIONAL SPORTS HISTORY
The Golden Knights became the 20th team from either the NHL, MLB, NBA or NFL/AFL to reach the championship series or game in their first trip to the postseason (via Elias†). Vegas is the sixth team in NHL history to achieve the feat, joining the 1917-18 Toronto Arenas, 1925-26 Montreal Maroons, 1926-27 Boston Bruins, 1967-68 St. Louis Blues and 1995-96 Florida Panthers.
* Like the Golden Knights, the Arenas and Blues advanced to the Final in their inaugural season, though under much different circumstances. Toronto did so in the first postseason in NHL history and St. Louis emerged from the all-expansion West Division during the first playoffs of the League’s expansion era in 1968. The Maroons (second), Bruins (third) and Panthers (third) all reached the Final within their first three campaigns.
* The 20-team list also includes the 2001 Baltimore Ravens – who began play as an NFL expansion team in 1996 after moving from Cleveland (where they had won four championships over 46 NFL seasons from 1950-1995) – and five NBA teams who joined from other leagues: the 1946-47 Philadelphia Warriors, 1946-47 Chicago Stags, 1947-48 Baltimore Bullets, 1948-49 Minneapolis Lakers and 1949-50 Syracuse Nationals.
* The remaining eight teams on the historic list started from scratch like the Golden Knights: the 1997 Florida Marlins (MLB; fifth season), 1976-77 Portland Trail Blazers (NBA; seventh season), 1967-68 Oakland Raiders (NFL/AFL; eighth season), 1969 New York Mets (MLB; eighth season), 1968-69 New York Jets (NFL/AFL; ninth season), 2008 Tampa Bay Rays (MLB; 11th season), 1984 San Diego Padres (MLB; 16th season) and 1977-78 Denver Broncos (NFL; 18th season).
* Ten teams have finished their first trip to the postseason as champions, including the Arenas (1918) and Warriors (1947) in the inaugural seasons for the NHL and NBA, respectively. 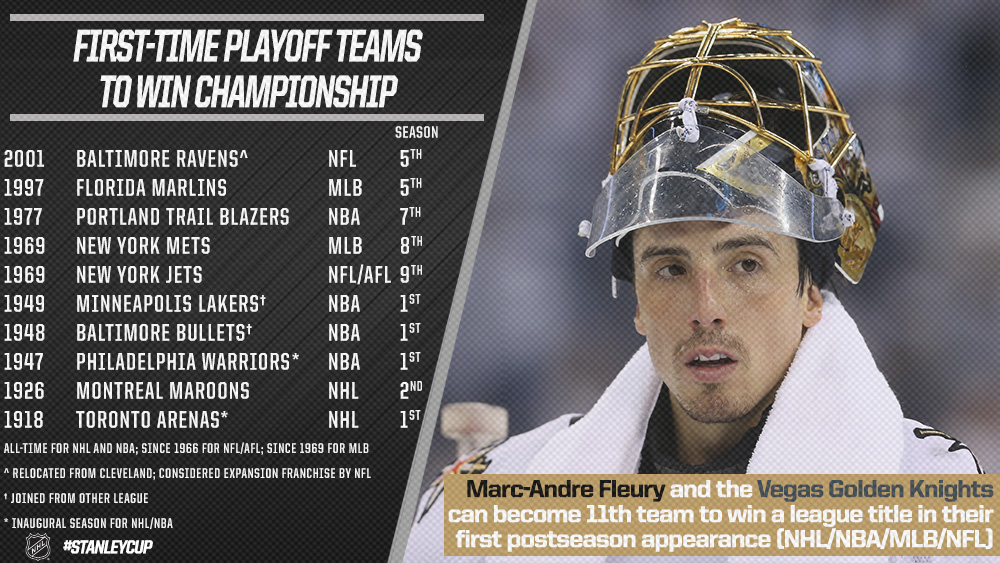 * The Golden Knights needed 12 playoff wins to reach the Final, tied with the 1996 Panthers for the most of any of the teams referenced above. In fact, only four other clubs required more than five playoff victories to reach the championship series or game: the Trail Blazers needed 10 wins to make the 1977 NBA Finals; the Blues had eight wins entering the 1968 Stanley Cup Final; and the Marlins and Rays each won seven games before playing in the World Series in 1997 and 2008, respectively.
* As the NHL’s 31st active franchise, the Golden Knights are the third team to reach the championship in a league consisting of at least 30 clubs. The others: 2001 Ravens (NFL: 31 teams) and 2008 Rays (MLB: 30 teams).
† All-time for NHL and NBA; Since 1966 for NFL/AFL; Since 1969 for MLB

FLEURY HEADED TO FINAL FOR THIRD STRAIGHT YEAR (FIFTH OVERALL)
Marc-Andre Fleury (31 saves) made at least 30 saves for the fourth consecutive game to improve to 13-5 in 20 career appearances in theConference Finals and reach the Stanley Cup Final for the third straight year and fifth time overall.

* Fleury and teammate James Neal return to the Final after facing each other in the championship series last year – Fleury with the Penguins, Neal with the Predators. Lightning forward Chris Kunitz – the only active NHL player with four Stanley Cups – could join the trio in this year’s Final after winning with Fleury and the Penguins in 2016 and 2017.
* Entering 2018, 37 different players in NHL history reached the Stanley Cup Final in consecutive years with different teams. Six of those players won the Cup each time: Eddie Gerard, Lionel Conacher, Ed Litzenberger, Al Arbour, Claude Lemieux and Cory Stillman.
* Gerard actually won the Cup in four consecutive seasons from 1920-23. He played for the original Ottawa Senators in each of those postseasons, but was loaned to the Toronto St. Patricks for one game during the 1922 Stanley Cup Final, thereby earning his name on the Cup when the team defeated the Vancouver Millionaires in the best-of-five series. 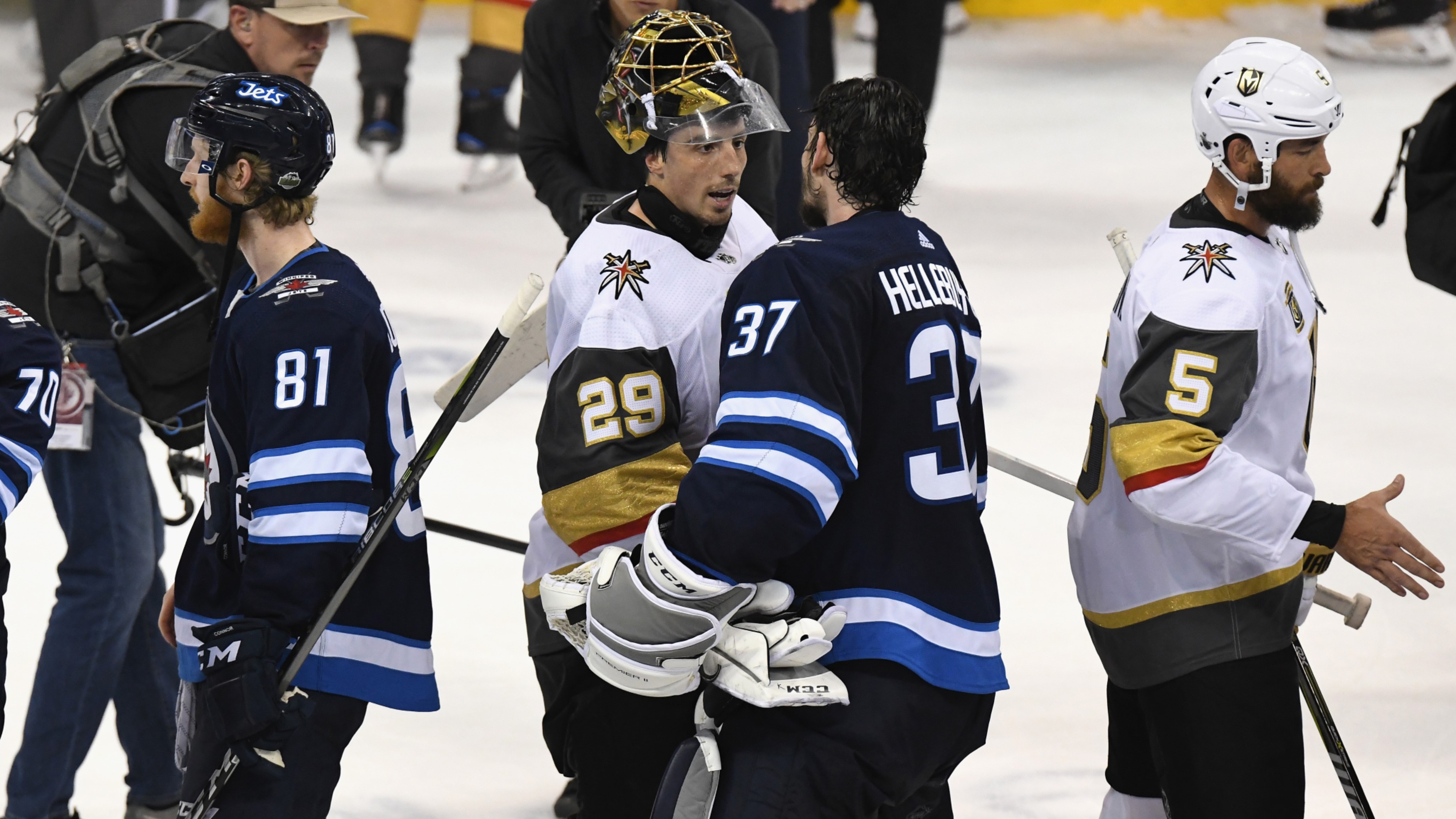 * Fleury earned his 74th career win in the Stanley Cup Playoffs to tie Chris Osgood for eighth place on the NHL’s all-time list, three back of Mike Vernon (77) for seventh overall. One of 14 active NHL players with three Stanley Cups, Fleury entered the 2018 playoffs with a team-leading 115 games of postseason experience and is the only Cup winner on the Golden Knights roster.

QUICK CLICKS
· Golden Knights' trip to Stanley Cup Final helps healing process (via Nicholas J. Cotsonika)
· How Golden Knights were built
· Capitals aim to change playoff narrative, defeat Lightning in Game 6 (via Tom Gulitti)
· Ryan Callahan puts Lightning one win from Stanley Cup Final with inspired play (via Dan Rosen)
· Lightning 'haven't accomplished anything yet' heading into Game 6 (via Tracey Myers)
SNEAK PEEK AT MONDAY’S ACTION
After losing Games 1 and 2 on home ice, Tampa Bay is now in position to join Vegas in the Stanley Cup Final as they take a 3-2 series lead into Washington for Game 6.
* Since 1942-43, when the final four began competing in best-of-seven series, only seven teams have won the Conference Finals/Semifinals after losing Games 1 and 2. Only one of those clubs did so after dropping the first two games at home: the Red Wings rallied to defeat the Bruins in seven games in the 1945 Semifinals. 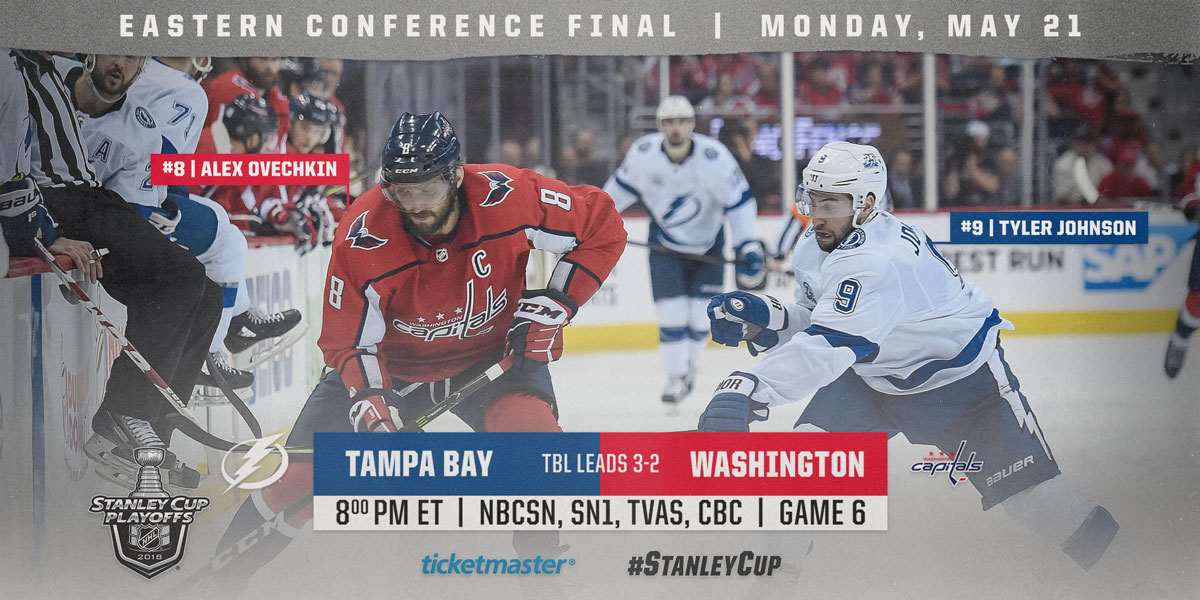