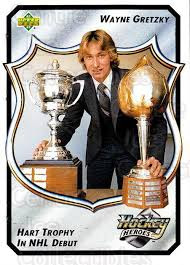 he NBA rebranded their individual trophies this week, allowing them to honour more modern legends. It created a lot of buzz in their league and questions in other leagues, including hockey
The idea is something that has come up in NHL circles more than a few times this century, although maybe not so much at the highest levels in the League itself. There is a certain inevitability to the idea. After all, how can the league not have a Wayne Gretzky trophy? Or Bobby Orr or Jean Beliveau? Sure they could just create new awards, but to honour legends such as these with anything less than the most important trophies in the game is unthinkable.
I think the time will come for this. In fact I believe the NHL missed a wonderful opportunity in 2017 to outright retire the existing trophies and introduce a whole new set honouring the more modern legends as part of their centennial celebrations..
Still, I don't totally like the idea. You would not rename the Stanley Cup now would you? So why rename the other trophies? And if I'm a player, I want to win the exact same trophies that Gordie Howe and Wayne Gretzky and Sidney Crosby won, just like the Stanley Cup. There is something historically romantic about that.
at December 16, 2022