Two Interesting Hockey History Projects You Should Know About

There are two very interesting hockey history projects you should know about. 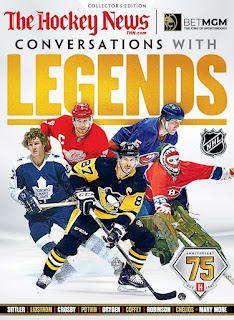 The first is Conversations With Legends, a special collectors edition magazine by The Hockey News. THN's writing staff interview about 40 of hockey's all time greats - from Sidney Crosby to Darryl Sittler to Niklas Lidstrom to Denis Potvin.

What I like best about this is it's not the usual love-in for Wayne Gretzky and Mario Lemieux. They give other deserving legends the profile space. They also interview legends from every existing franchise. It's a fresh take and provides some great reading.

The other interesting project is by The Athletic. Now that means it's behind a pay wall, but I find The Athletic's NHL journalism to be worth it.

It will take a while to unravel the list. They will unveil each position regularly through February, starting with Marc Andre Fleury at 100. That's good though, because the quality of the articles The Athletic comes through with are fantastic reading and each article deserves the time to be enjoyed.