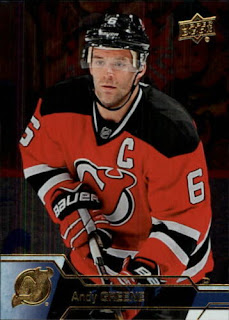 Andy Greene ended his NHL career this week after 16 seasons. Though he had played the last couple of seasons with the New York Islanders, he will always be remembered as the captain of the New Jersey Devils.

Greene, nearly 40 years old played 16 seasons in the NHL had 264 points (52 goals, 212 assists) in 1,057 games with another 14 points (five goals, nine assists) in 90 Stanley Cup Playoff game.
That is a very respectable career for anyone, but especially for a player who was passed over in the NHL draft year after year.
"Coming out of Miami University in 2006, as an undrafted free agent, I was lucky enough to sign an NHL contract with the New Jersey Devils," Greene, a native of Michigan, said. "In January of 2007, I fulfilled my dream and played my first NHL game. As I sit here 16 years later, it still seems surreal that I was one of the fortunate ones who got to do what I had dreamed of when I was five years old.

"I want to thank the New Jersey Devils organization, for giving me my first day and last day in the NHL. You have treated not only me, but more importantly my family, with nothing but love and respect and I will be forever grateful for that. Thank you also to the New York Islanders organization for the past two and a half years."

Greene, who signed a ceremonial one day contract with the Devils to officially retire with the organization, will continue to live in New Jersey and work with the franchise where he is needed.

"Andy was a bedrock for New Jersey during his 14 years and developed into an exceptional leader and what it meant to be a Devil," general manager Tom Fitzgerald said. "He was a consummate professional when times were hard and a representation to his teammates in the locker room. It's only right that he announces his retirement from the National Hockey League as a member of the Devils and we thank him for all that he's done on and off the ice for the organization."
Greene seemed to be a big presence on the ice, despite his understated size (5'11" and 185lbs). He was not blessed with much speed to compensate either, but he was a gifted skater in other ways. He was a very efficient with his skate work resulting in excellent lateral agility. He was also had great balance. He was very hard to knock off the puck.
Offensively his numbers do not suggest he was a significant contributor, yet he regularly played power play time in his prime. He wasn't terribly dynamic but had a accurate point shot he was able to get through traffic. He also had an uncanny ability to perfectly space himself from a defender to receive a pass and get that shot on net.
Defensively he was very solid, especially when he became more assertive as he became more comfortable in the league. He could be overwhelmed by the speedier forwards in the league but generally was strong on his gap control. He absorbed forecheckers wisely to create a little more time and space for him to make a strong outlet and relieve the pressure. He was not afraid of the physical game despite his short frame, and did so in a very clean way. He only accumulated 277 career penalty minutes.
at October 17, 2022