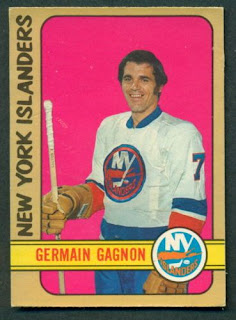 This is Germain Gagnon.

On October 12th, 1972, Germain Gagnon scored with 69 seconds left in the game to give the New York Islanders their first victory ever in team history. Final score: 3-2 Islanders over Los Angeles.It would prove to be one of only twelve wins in a 78 game schedule for the inaugural Isles team. It was a long season for the players and the fans. Despite the team's nightmarish season, for Germain Gagnon, already a long time minor leaguer, his first full season in the NHL was a dream come true.Gagnon, a lanky left winger out of Chicoutimi, Quebec, had spent most of the previous seven seasons in the minors. He toiled in places like Omaha, Houston, and Memphis as well as Quebec, Vancouver, and Nova Scotia. He enjoyed a breakout season with Nova Scotia in 1971-72, earning him his first four game call up to the NHL.The Habs traded Gagnon to the expansion Islanders. Gagnon had no chance of playing in Montreal, but he became a key player in New York, finishing third in team scoring with 12 goals and 41 points. Only Ed Westfall and Billy Harris had more points. He also registered the first hat trick in Islanders history.Gagnon returned for most of the following season, playing in 62 games before a late season trade to Chicago. His offense had dried up.Gagnon's time in New York was dutiful though insignificant. But he did play a role in Denis Potvin's future.When Potvin, the most heralded defenseman to break into the league since Bobby Orr, arrived in New York, they asked what number he wanted to wear.“I told him that I wore the number seven in junior hockey with the Ottawa 67’s,” Potvin explained. “Of course I had no idea who was who on the Islanders at the time and it turned out that there was a fellow named Germain Gagnon who was wearing the number seven.”Potvin went on to say, “Of course, this is in September of ’73 and at that point I had to pick another number. I said ‘Well, let me see what I can think of.’ The next morning I got in to the dressing room and the number seven jersey was hanging up in my stall, but there was a note on it. Germain Gagnon was willing to let me wear number seven if I paid him $500. In 1973? So I said, ‘Forget it.’ ”Gagnon found his game in Chicago, turning in his best NHL season in 1974-75. He set career highs with 16 goals and 51 points with the Hawks.Only 5 games into the 1975-76 season Gagnon found himself traded to the lowly Kansas City Scouts. Gagnon floundered, only scoring 1 goal in 31 games to end his career on a whimper.Gagnon ended up playing in a very respectable total of 259 NHL games. In that time he scored 40 goals and 101 assists for 141 points. He added 2 goals and 5 points in 19 playoff games, all of which came in his two springs in Chicago.