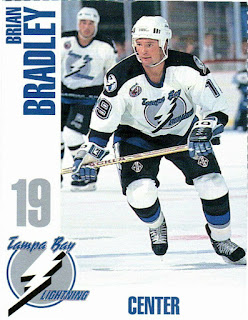 Brian Bradley, a two-time All-Star with the Tampa Bay Lightning, announced his retirement on September 23, 1999. He was another victim of the NHL's most dangerous injury heading into the new millennium -post-concussion syndrome.

Suffering from daily headaches as a result of a concussion suffered during the 1997-98 season with Tampa Bay, the first star in Lightning history was as only able to participate in just 14 games in his last two seasons in the NHL.

"Unfortunately I have to retire due to post-concussion syndrome," said Bradley. "I really appreciate the time spent in the NHL and wish I could continue playing. However, I am fortunate to have played in the NHL for as long as I did and I appreciate the experience of playing with some great players, and great people."

Bradley was the Lightning's first star player. He retired as the all-time leader in goals (111), assists (189) and points (300). Those totals included Bradley's All Star year as a member of the inaugural Lightning team in 1992-93 which saw him set an expansion team record among non-WHA teams during the 1992-93 season with 42 goals. He also represented the Bolts in the 1994 All Star game.

Bradley began his career as a standout in junior with the OHL's London Knights. After three spectacular years with the Knights, and a incredible 1985 World Junior Championships in which Bradley dominated with a 9 goal, 15 point effort, Bradley was selected 52nd overall by the Calgary Flames.

Concerns about his size and strength would follow Bradley for his entire career, but especially so in the early years. Despite showing tremendous skill and ability at the minor league level, the Flames didn't have room for the smallish center on their already deep lineup which included smallish centers like Dan Quinn, Carey Wilson and Steve Bozek to go along with hulking Joel Otto. Bradley only got into 45 games in 4 years with the Flames organization.

Bradley was determined to play in Calgary come the 1987-88 season, only he knew it wouldn't of the NHL variety. Bradley committed to a year of apprenticeship under Dave King and the Canadian National Team which was based in the Alberta city. More importantly, 1988 was an Olympic year and the Olympics were going to be played in Calgary! What an opportunity for Bradley to make a name for himself right in front of the Flames own fans!

Bradley had a strong year but a so-so Olympics. He pitched in 7 assists in 7 Olympic games but his ice time and effectiveness were hurt by the late addition of a few NHL players loaned to the team for the Olympics. Earlier in the year Bradley was one of the team's key go-to guys that won the famed Isvestia tournament. Teamed with Serge Boisvert and Wally Schreiber, Bradley's line was arguably the best two way line on the team. But with the addition of NHL talent like Steve Tambellini, Jim Peplinski and Ken Yaremchuk, Bradley's line was asked to fulfill more of a defensive role. The last minute addition of the fringe NHLers cost the team its chemistry and probably a medal, as they finished 4th overall.

Very quickly after the Olympics the Vancouver Canucks acquired Bradley in a lopsided trade. The Flames dumped Bradley, Kevan Guy and Peter Bakovic in exchange for Canucks tough guy Craig Coxe. Landing Bradley for Coxe was shocking enough for Canucks fans, but getting Guy and Bakovic as throw ins too was that much more amazing.

The Canucks were hoping Bradley would be their Knight in shining armor as the team reunited the playmaking center with his two wingers from his junior days with the London Knights - Jim Sandlak and Dave Lowry. Lowry and Sandlak had been busts up until that point, as they were being counted on to supply offense. It was hoped that Bradley could come in a create some old magic, this time at the NHL level.

The experiment didn't work out however. Shortly afterwards Lowry was moved St. Louis and Bradley and Sandlak didn't click like hoped. Bradley showed promise in his time in Vancouver though. He chipped in 18 and 19 goals in his two full seasons, as well as 45 and 48 points. He showed great puck skills and creativity, as well as speed, but was too easy to knock off the puck because of his lack of size, strength and balance. He also lacked good positional play which hurt him and his team when he didn't have the puck. He appeared in 193 games in parts of four seasons with the Canucks and recorded 51 goals and 81 assists.

Bradley was traded to Toronto in January 1991 for defenseman Tom Kurvers. Bradley had 10 goals and 32 assists in 85 games for the Maple Leafs, showing brief moments of brilliance accompanied with extended periods of nothing.

The Lightning selected Brian in the 1992 expansion draft and he immediately made every one of his former teams look silly for not giving him a better chance. He was an exciting player in 1992-93, scoring 42 goals and adding 44 assists for 86 points, easily a career high. Could it be that Bradley finally was given the right opportunity to shine? Or was he just the beneficiary of being a rare offensive player on an expansion team that no one cared to check? Either way, Bradley was in the right place at the right time!

Bradley's production would slip a in 1993-94, as he scored only 24 goals but added 40 assists. Teams began to focus more and more on the playmaking center as league parity meant every game was essential.

Bradley returned to his dominating form by 1995-96 when he scored 23 goals and a career high 56 assists for 79 points. However things went downhill quickly after that for Bradley. A controversial wrist injury seemed to be taking longer to heal than expected, and some players, most notably Dino Ciccarelli, questioned Bradley's heart and commitment to the team. This sparked a war of words in newspapers between the two, and tore apart the dressing room.

Ciccarelli was soon traded and rumours had it Tampa was looking to move Bradley as well, thus eliminating both bad seeds. Bradley however never was moved. When he finally returned from the wrist injury he was quickly injured again, this time suffering the serious concussion that would end his career.

So what was Brian's career highlight?

"Playing in my first All-Star Game was one of the big highlights,” said Bradley of the 1993 game played in the Montreal Forum. “I remember being very nervous, but Wayne Gretzky and other guys made me feel like I belonged.”
at June 13, 2022