Russia has invaded Ukraine. I am not knowledgeable enough to comment on politics, or international affairs, but clearly this a terrible situation that could just be the beginning of an unthinkable powder keg. That last thought might be getting ahead of ourselves. In the meantime how is Ukraine supposed to defend itself against such an army, without any military help from other nations? This is not going to end well.
All that being said, Ukraine being in the news turned my thoughts to something completely trivial at this point. Hockey. Of course. I wondered if I could name a Ukrainian hockey player. I couldn't without looking it up. There have been eight Ukrainian players reach the National Hockey League: 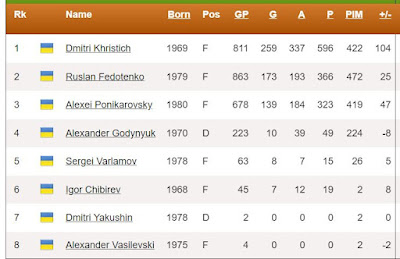 Now of course I've heard of the first four. Dmitri Khristich was a regular 30+ goal threat most notably to Washington. Ruslan Fedotenko was a nice piece of the Tampa Bay Lightning's 2004 Stanley Cup championship. Alexei Ponikoarovsky - The Poni Express - was a highlight in Toronto. Alexander Godynyuk was one of the younger former Soviet players to arrive after the fall of the Eastern Bloc but never really found a NHL home.
The other four players all had cups of coffee in the NHL, but I'm sorry, I don't remember you. But I think most serious NHL fans of the 1990s/2000s will remember the first four.
It should be noted that the highest scoring Ukrainian born player in NHL history is not represented on the list above. Peter Bondra, the Washington Capitals goal scoring great (and one of the most underrated superstars in NHL history) was born in Lutsk, Ukraine but was Slovak through and through. His father moved to Ukraine for work in 1968. The family returned to their Slovak home when Peter was three years old.
When it comes to Ukrainian hockey history, we should also mention the name Anatoli Khorozov.
Khorozov is the only Ukrainian inducted into the International Ice Hockey Federation's Hall of Fame.
Born in 1925, Khorozov was a World War II veteran who, following the war, dedicated his life to Ukrainian hockey. He served as the president of the Ukrainian Hockey Federation from 1965 all the way to 1997. He was instrumental in the building of rinks and youth hockey programs and ultimately the rise of Sokol Kyiv hockey team into a power in the Soviet hockey league.
Let's also mention Alexander Almetov. He was born in Kyiv in 1940 when Ukraine was part of the Soviet Union. He went on to star with the legendary CSKA Red Army teams and Soviet national teams in the 1960s, forming a powerful troika with Konstantin Loktev and Venjamin Alexandrov. He won Olympic gold in 1964 and five consecutive World Championship golds from 1963 through 1967. He was noted as a very strong defensive forward and penalty killer.
All of this matters not in comparison to the invasion of 2022, which hopefully somehow ends with freedom and peace for Ukrainian people in the near future.
at February 27, 2022