Under where? 1983 New York Islanders in Penthouse Magazine 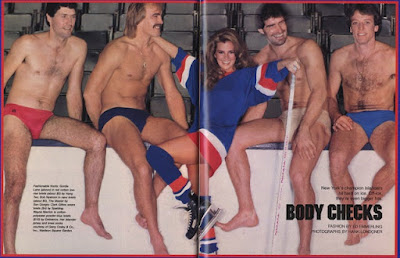 This is a photo of a Penthouse magazine spread from February 1983. That issue featured a six page layout showing four members of the Stanley Cup champion New York Islanders - Clark Gillies, Wayne Merrick, Gordie Lane and Bob Nystrom - hanging around the dressing room in little more than their unmentionables. Victoria Lynn Johnson, a one time Penthouse Pet of the Year, has some how found her way on to the ice. In this photo she is wearing considerably more clothing than the guys, but in another she is not.