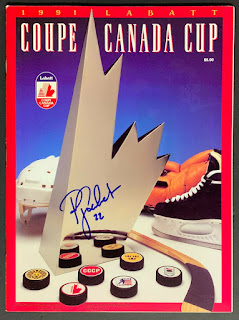 Aside from the Stanley Cup, my favorite hockey trophy is easily the old Canada Cup trophy.

The Canada Cup tournament was the original incarnation of the World Cup. Held in 1976, 1981, 1984, 1987 and 1991, the tournament was the first true best on best hockey tournament, though it was mostly a showdown between the only two hockey powerhouses of the time, Canada and the Soviet Union.

The heavy trophy, made of $11000 (1970s dollars) of nickel, was a stylized Canadian half maple leaf. The original trophy resides in the Hockey Hall of Fame. At one time the official replica trophy was said to reside at Rideau Hall, the official home of the Canadian governor general, in Ottawa. A third replica exists, though the whereabouts are unknown. When the Soviets won in 1981 but were not allowed to take the trophy home with them, a Winnipeg trucker named Gary Smith commissioned a replica and took it to Moscow to give to them.

Anyway, did you know in 1991 Team Canada lost the famous trophy only hours after winning it?

The Canadians, despite missing an injured Wayne Gretzky, swatted aside the upstart Americans to win the tournament. Afterward, the team celebrated from their headquarters at the Westin Harbour Castle hotel in Toronto and got a little carried away. At one stage they were racing around the property in a golf cart when the trophy may have vacated the vehicle one way or another.

A hotel bellman put the trophy in a storage room. Hotel staff had their own fun snapping photos with the trophy before panicked Team Canada officials began looking for their lost treasure.

The trophy was officially found in the hotel's lost and found, much to the relief of everyone.