The Vancouver Canucks finally - FINALLY - cleaned house this week, ending perhaps the most disappointing era for a franchise that has many of them.

Gone are GM Jim Benning, his assistant John Weisbrod (who in 8 years we haven't been able to figure out what exactly he did anyway), coach Travis Green and assistant coach Nolan Baumgartner.

Eight years of failure is over. Now to salvage what can be salvaged, and move forward.

Leading the way is new coach Bruce Boudreau, an excellent choice to change the immediate atmosphere among the players, on the ice and in the dressing room. He will build these guys back up again and bring some joy back to the game. That is what is what is immediately needed, especially for underperforming Elias Pettersson. Boudreau's key job this season is to resurrect #40. The playoffs are already out of reach, but finding Pettersson's elite game again and making him happy is the key to the Canucks future.

The Canucks also need to fill the front office holes, namely general manager and hopefully a president of hockey operations. They really, really need to look at adding more to their front office too. They must have one of the smallest front offices in pro sports. The more voices, the more ideas, the better.

Stan Smyl was named as interim general manager. No one is really sure how much autonomy he really has, though no one seems to expect him to be there long. He is a placeholder until the next boss arrives. 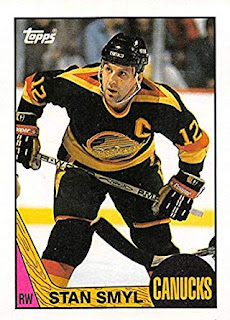 Smyl needs no introduction in Vancouver. He was a Lower Mainland junior legend from 1974 to 1978 when he was drafted by the Canucks 40th overall. He went on to be the long time captain and heart and soul of the team on the ice, retiring as a Canuck in 1991 with his #12 raised to the rafters. He immediately became a fixture in Canucks management, working in almost every capacity in the past 30 years.

But Smyl already made a significant impact, reminding us all that a) the organization actually still does have a heart and soul, and b) it is very much Stan Smyl.

In the press conference announcing Smyl would serve as interim GM, he came across with passion, humility and an honesty that calmed the angry masses.

“I will always do what’s best for this organization. I will always step up when asked to help. Bottom line, our performance this season has not been good enough. We do have some talented young players and a good core to build around. But we need to be better… There is pride in wearing this Canuck jersey. There is also a huge responsibility that comes with pulling on that jersey… It’s an honour to be sitting here today. This opportunity and responsibility means the world to me, and I will work extremely hard to get this team back on track.”

He was also blunt and clear, and clearly something the Canucks need more of.

“To get out of it, it’s not just going to be one individual. It’s going to take a team and they’ve got to come back to being a team, and make it hard to play against. That’s the identity I want for this organization, to be hard to play against. If I’m lining up against you, I’m going to make it as miserable as possible. That was my message to Francesco. I talked to the players about that this morning. I think that’s an important area and that’s an area we’ve got to start in.”

He sounds almost presidential there, doesn't he?

Many changes have been made and will continue to be made in Vancouver. One that needs to be sure to happen is that Smyl's voice is heard more.

In truth, the Canucks big mistake was not keeping Trevor Linden, who provided all the leadership needed to keep the team on track. Benning had a good game plan, and that was stockpile young talent on the team - and it happened. He just didn't have the ability to take it to the next level. Who knows if Linden did? But he did have a right idea - don't cut corners on rebuilding. Keep stockpiling talent.

Jim Rutherford, however, is the first Canuck president/GM to have had previous top-level GM experience since Jack Gordon. And he is the first GM or president to have won the Stanley Cup as a top-line general manager (he won three times). He may well get Vancouver there.