Where is Bob Gainey?

The Montreal Canadiens made bold changes this week, removing Marc Bergevin as king pin and replacing him, in part, with Jeff Gorton and soon to be announced others. A whole new regime change.

Names already being linked with the new regime include former Habs Daniel Briere and Patrick Roy, although if I'm Jeff Gorton or Geoff Molson, I'm looking at Mathieu Darche, one of the assistants in Tampa Bay. (Or, is there any chance Julien Brisebois, the Lightning's top boss, wants to come home?) 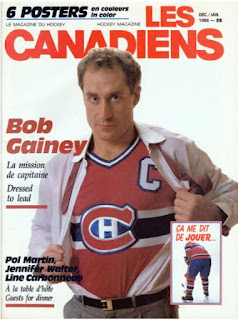 But a name from the past creeped up in my mind - Bob Gainey. The Hockey Hall of Famer needs no introduction. One of the Habs and NHL's all time great players who turned into powerful coach and manager, including with the Habs from 2003 to 2010. He vacated his GM position with Montreal for personal reasons, saying he could not make the long term commitment needed for the job.

It always struck me at that time that Gainey was, like Bergevin now, burned out. Just the words he used to explain his departure.

"I believe that the general manager position requires a long-term vision and commitment, and I did not want to make a commitment for four or five or six more years," he said. "If I have to choose between leaving a bit too soon or staying a bit too long, I prefer to leave earlier. I've done my best and now it's time to pass the torch."

Gainey's burnout was likely exacerbated by the death of his 25 year old daughter Laura in a sailing accident in 2006. How could it not? Especially coming off his wife Cathy's death in 1995 from cancer, at the age of 39. Gainey likely just needed to get away.

And get away he did. He did initially stay on with the Habs as a consultant, a nice gesture from the Molson family. He also briefly served as a consultant with the Dallas Stars in 2012 and the St. Louis Blues in 2014.

But otherwise Bob Gainey has seemingly all but disappeared from the hockey world. I do not for one second believe that at this age (Gainey turns 68 this month) that Gainey wants to return to the Habs as the general manager, though he did make an appearance in the Montreal Canadiens dressing room during the 2021 Stanley Cup playoffs.

But I did get to wondering where is Gainey these days and how is he doing? It does not appear that he (or another Habs great, Larry Robinson) are still with the Blues as advisors. He appears to have moved home to Peterborough, Ontario where he acts as a volunteer advisor his old junior club, the Peterborough Petes.  He recently sold of a significant amount of his personal hockey memorabilia, including his five Stanley Cup rings, to raise over $300,000 for the Gainey foundation in memory of his wife and daughter.

By the way, I found out this small piece of information quite interesting. You likely know Gainey had a son named Steve who was drafted by his father and briefly played in the NHL. But Gainey has a daughter named Anna who was the president of the Liberal Party of Canada through 2018.