Long before any one had ever heard of the St. Louis Blues, the NHL had a team called the Eagles in the Gateway City. 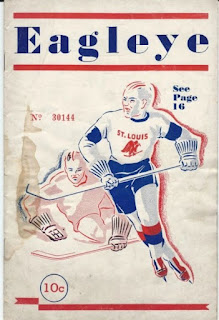 It was for just one season - 1934-35. And if you know any 20th century history at all, you already see the problem. That season came at the height of the Great Depression and the team was another casualty.

Sadly, the fact the NHL was in St. Louis at all was a desperate attempt to save one of the original great franchises in all of hockey history - the original Ottawa Senators. They were hockey's first powerhouse, predating the NHL, facing off for the first time in 1883. Including the seasons where they skated to their original nickname of the Silver Seven, Ottawa won 11 Stanley Cups, including four after the formation of the NHL in 1917.

Ottawa was the NHL's smallest market back then, and they had reportedly been a money loser even before the stock market crashed resulting in the Dirty Thirties. To try to stay afloat, the NHL unwisely moved the team to Missouri.

St. Louis has proven to be a good hockey town, with solid success with the Blues and the minor league Flyers before them. But in addition to the Great Depression the low flying Eagles had their financial woes exacerbated by their exorbitant travel costs. They simply could not carry on and folded, dispersing the players around the rest of the league.

The Eagles won only 11 games in the 48 game season, finishing dead last in the league and not qualifying for the playoffs.

Notable players to play for the Eagles included:

Syd Howe, team captain at an early age who would move on to Detroit and become their best player before anyone had ever heard of the unrelated Gordie Howe

Carl Voss, who led the Eagles in scoring with 31 points.

Vic Ripley, believe it or not.

Cliff "Fido" Purpur, one of hockey's all time great names.

Bill Cowley, who would retire as the NHL's all time leading scorer at the time.

"Cowboy" Bill Cowley - Boston Bruins 2 time cup winner and 2 time Hart Trophy winner was the LAST Eagles player to appear in an NHL game. He was the Phil Esposito / Wayne Gretzky of his day.

We could wonder what if the NHL had moved the Senators to Cleveland or Buffalo instead of St. Louis or what if they have amalgated the Sens with the Maroons or the NY Americans well before the NHL Cleveland Barons(former Oakland Seals) with the North Stars?