The Florida Panthers have won the first 10 home games, and with a win tonight against the visiting Philadelphia Flyers can match the NHL record for longest home winning streak to start the season. 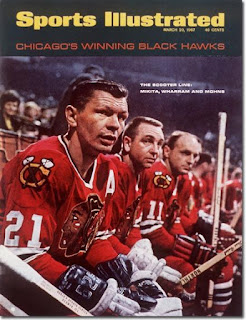 That was a powerful Hawks team. Hull would end up leading the entire league in goals with 43. Both Mikita and Wharram had 39 goals. Mikita was the playmaker of the line and finished with 89 points, enough to win the Art Ross Trophy as the league's scoring leader. Not surprisingly the Hawks led the entire NHL in goals tallied that year.

The Hawks also had Pierre Pilote on the blue line, one of the game's all time great two way defenders. But despite his presence and having the great Glenn Hall in nets, the Hawks ultimately could not win a playoff series that year. They lacked the depth to support their star players.