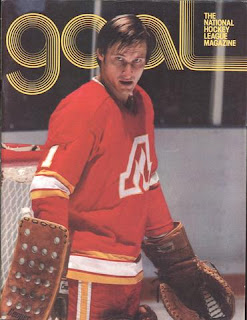 Phil Myre was drafted 5th overall by the Montreal Canadiens in 1966. However Myre quickly became the bottom man on the totem pole in Montreal. The Habs already had Rogie Vachon and Gump Worsley. They also had Tony Esposito just starting to break in and they had a kid still playing college hockey by the name of Ken Dryden.Myre spent his first professional season in Houston, Texas where he played for the CHL's Apollos, an affiliate of Montreal. He excelled at that level, being named the league's top goalie in his rookie year. By 1969-70 he was elevated to the Habs chief affiliate team in the AHL and excelled there as well, rapidly improving his ranking in the organization. When Gump Worsley was moved to Minnesota early in the 1969-70 season, Myre earned a shot to play as Rogie Vachon's back up with the Habs. Although he did very well in his sporadic appearances (4-3-2 record with a puny 2.27 GAA in 10 games), in hindsight Myre wished he could have played more at the AHL level before jumping to the NHL. He would rather have been playing in the minors than warming the bench in the big league.