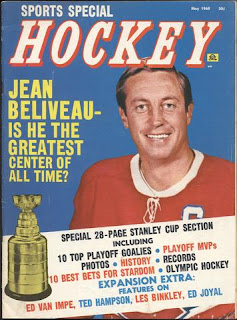 Mention the name Jean Beliveau, and so many images come to mind. His size, his skills, his class - he was the perfect hockey player and an even better person. He's one of the few players that seems to have transcended the game itself, particularly in his native Quebec.

Le Gros Bill" (Jean was nicknamed after a French folk hero) was the centerpiece of the mighty Montreal Canadiens dynasty that accumulated 10 Stanley Cups during his extraordinary reign. Five of those championships came with him serving as captain - no other man has captained his team to more Stanley Cups. Twice voted the NHL's MVP, he was a First All Star in 1955, 1956, 1957, 1959, 1960 and 1961. He was the scoring champ in 1956 and was the first recipient of the Conn Smythe Trophy as the MVP of the playoffs in 1965. He accumulated 507 goals, 712 assists for a point total of 1219 in 1125 games, all with Les Habitants. He racked up 176 more points in 162 playoff games.Most "experts" agree that Beliveau is one of the top ten players in hockey history. He is also almost universally regarded as one of the top three centers in NHL history - along with Wayne Gretzky and Mario Lemieux.
Full Jean Beliveau Biography
at October 20, 2021