Mention the name Jean Beliveau, and so many images come to mind. His size, his skills, his class - he was the perfect hockey player and an even better person. He's one of the few players that seems to have transcended the game itself, particularly in his native Quebec. 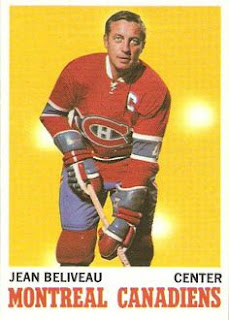 "Le Gros Bill" (Jean was nicknamed after a French folk hero) was the centerpiece of the mighty Montreal Canadiens dynasty that accumulated 10 Stanley Cups during his extraordinary reign. Five of those championships came with him serving as captain - no other man has captained his team to more Stanley Cups. Twice voted the NHL's MVP, he was a First All Star in 1955, 1956, 1957, 1959, 1960 and 1961. He was the scoring champ in 1956 and was the first recipient of the Conn Smythe Trophy as the MVP of the playoffs in 1965. He accumulated 507 goals, 712 assists for a point total of 1219 in 1125 games, all with Les Habitants. He racked up 176 more points in 162 playoff games.

Most "experts" agree that Beliveau is one of the top ten players in hockey history. He is also almost universally regarded as one of the top three centers in NHL history - along with Wayne Gretzky and Mario Lemieux.

Mario Lemieux is most often compared to Jean, and it is a very accurate assessment. That statement alone gives younger fans an idea of just how Le Gros Bill was. Like Mario, Big Jean was an almost unseen blend of grace and power. He had the body of a giant, yet was such a gentleman. He could use his physical gifts to dominate a game, but more often than not relied on his skill and smarts.

Wild Bill Eznicki, one of the most physical players of his era, recalled what it was like to attempt to knock down Beliveau: "It was like running into the side of a big oak tree. I bounced right off the guy and landed on the seat of my pants."

His uncanny physical gifts weren't his only blessing on the ice. He was a great skater - deceptively fast due to his long stride. He was a puckhandling wizard with a great knack for goal scoring. He was a majestic player known for his crisp passes and laser like shot.

Beliveau's journey to Montreal was one of the most interesting in pro sports history. The Canadiens purchased an entire hockey league in order to get him. The Habs held Jean's negotiating rights, but he refused to sign with them, preferring to stay in his hometown of Quebec City where he already was a legend with the junior team and was being paid big money to play as a supposed amateur in the Quebec Senior League. In fact many reports suggest he was being paid more money than any professional of the day, including Gordie Howe and Rocket RIchard! But moreover, Jean felt a great deal of loyalty to the Quebec Aces and the people of Quebec City, and just wasn't quite ready to leave yet. He was treated like royalty, and he wanted to stay to repay his debt of gratitude.

However the Canadiens had just won their first Stanley Cup since 1946 in 1953 and they wanted to inject some of their top junior prospects in order to get them over the hump known as the dynastic Detroit Red Wings of the 1950s. Dickie Moore and Boom Boom Geoffrion were two key additions, but the graceful giant Beliveau was a must have as far as Frank Selke was concerned. He went to great lengths to ensure he could get Beliveau in a Habs jersey. The Canadiens purchased the whole league and turned the league professional just to get Beliveau in a Habs jersey! Beliveau could have played in the amateurs forever but once he became a professional he had to play with Montreal. By turning the whole league professional, Beliveau had to travel down the highway and lace up for Montreal.

It was money well spent for the Montreal Canadiens, and hockey fans everywhere. Success wasn't immediate though. He struggled through injuries in his rookie season and the Habs fell in the Stanley Cup finals in each of Beliveau's first two years.

But by 1955-56, Beliveau and the Habs arrived. Beliveau seemingly took the torch from Rocket Richard's hands and led the Habs to their first of 5 consecutive Stanley Cups. En route, Beliveau scored a league high 47 goals and 88 points in the regular season, plus 12 goals and 19 points in 10 post season games. It was one of the greatest seasons by any individual in hockey history.

The Canadiens owned the remainder of the decade. Beliveau was of course a huge part of what many consider to be the greatest team in NHL history. He never quite duplicated his great 55-56 season, though came close in 1958-59 when he again lead the league with 45 goals in just 64 games, plus 91 points. While the Habs of course won the Cup that year too, Jean was only able to play in 3 games (accumulating 5 points) due to injuries.

The 1960s have been termed The Forgotten Decade by Montreal Canadiens decades. Rocket Richard had retired at the beginning of the decade, and the Canadiens got off to a slow start in terms of championships. But by the end of the decade Jean led the Habs to 5 Stanley Cups in 7 years (including 1971).

5 championships in 7 seasons has earned the Toronto Maple Leafs of the 1940s and the Edmonton Oilers of the 1980s dynastic status, but that has eluded the Habs of the 60s. Perhaps that was because Canada's other team - the Toronto Maple Leafs - did so well and it is remembered their decade. And despite great peformances from Jean, Geoffrion, Henri Richard and many Canadiens, that team seemed to lack that one iconic attraction that captured the Quebec fans - like Rocket Richard of the 1950s and Guy Lafleur of the 1970s.

That 1971 Stanley Cup was special. The Chicago Blackhawks were favored to win, yet somehow a combination of the old guard and some of the young guns of the 1970s dynasty teamed together to win a surprise Cup. It was a perfect moment for Jean to ride out into the sunset. He retired at the end of the playoffs.

Beliveau achieved all of this despite some major obstacles. He had to play under the shadow of Rocket Richard, something which became even more difficult once Richard slowed and retired and Jean became the man known as Richard's "replacement." He faced constant criticisms because of the comparisons to Richard. No matter how many Cups Beliveau could deliver, there was no replacing the Rocket of course. Plus he was criticized because of his status as the most talked about junior player in history at the time, plus his battles with injuries over the years.

One of the biggest obstacles he had was his heart. No one ever questioned his desire, but his heart was diagnosed as being too small for his gigantic body. Doctors proclaimed that it was amazing that Beliveau could perform as an athlete. But perform he did, and at a level few others have attained. His body obviously learned how to cope under such athletic stress. Basketball players Hank Gathers and Reggie Lewis died on the court with a very similar ailment. Other than some occasional fatigue, Beliveau was unaffected. Actuality

Beliveau had a sometimes rocky relationship with the fans and media over his playing days, but in retirement he has become even more legendary. For many years he continued to work as an executive for the Habs and for Molsons. He has this uncanny charisma that not even Wayne Gretzky has - he just has this way of making whoever he is talking to - no matter if it is the Prime Minister or his garbage man - feel like he is the most important person at that particular time. He genuinely cares.

He was a master of public relations, always knowing how to give the public exactly what they wanted.. Beliveau would serve with 8 major corporations, and reluctantly had to turn down opportunities to become a senator and governor general of Canada. He opted not to go to Ottawa as he felt he had to stay home and help raise his daughter's children, who lost their father, a Quebec police constable, to suicide.

"Rarely has the career of an athlete been so exemplary. By his courage, his sense of discipline and honour, his lively intelligence and finesse, his magnificent team spirit, Beliveau has given new prestige to hockey."
at March 08, 2018

Rarely has the career of an athlete been so exemplary. By his courage, his sense of discipline and honour, his lively intelligence and finesse, his magnificent team spirit, Beliveau has given new prestige to hockey."

Couldn't have said it any better myself. I couldn't stand the Habs growing up but always respected and was in AW of this man. If only we had players today with class like Beliveau.

I have a pin back that has: Beliveau than a blue star written inside 4 on the back of what could been the white jersey (away). I HAVE LOOK EVERY WHERE ON THE NET BUT CAN NOT FIND IT. THANK FOR YOUR HELP. Marcella

I just saw Jean near the end of his career (1968-1971) but that last half of 1968 was something else and he was 36, approaching 37 with that physically small but athletically and publicly BIG HEART and for "tingles up the spine" in anticipation of a between periods interview he was 2nd to none. Finally in 1986 I met him in Vancouver and while I am not usually the type to ask for an autograph I did get one for an old 1964-65 Hockey Register!

Rest in peace Jean Beliveau ! You will always be remembered.

I have always thought of Jean Beliveau as the Stan Musial of Canada. An astonishingly great athlete who might have been an even better person.

I was never a fan of the Canadiens but was awestruck at the sportsmanship, leadership and athletic abilities of Jean Beliveau, a true statesman of the game and a great Canadian.