Those Were The Days: Wayne Gretzky 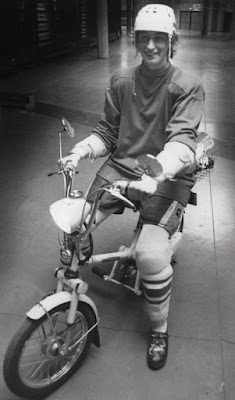 When 17 year old Wayne Gretzky arrived in Edmonton, he had promised his dad he would stay in school until he was 18.
Only problem was the youngster was already playing professional hockey and his schedule was dictated by practice and travel time. And back in 1978 there was no such thing as online classes or distance education. And student athletes didn't have the same opportunities to take classes in their off-seasons like most do nowadays.
So when he was not ripping up the World Hockey Association (remember Gretzky debuted in Edmonton in the WHA a year before the team merged with the NHL), at practice or travelling from city to city, Gretzky was trying to go to Ross Sheppard High School.
Not surprisingly, Gretzky did not graduate. He turned 18 before the school year ended, and he stopped going to the school he barely was able to attend anyway.
Ross Sheppard High School probably made it easier for star student athletes to graduate while pursuing athletics in the years since. Figure skaters Jamie Sale and Susan Humphreys, CFLer Hugh O'Neill, NHLer Paul Comrie, and Olympians Jessica Gregg (speed skating), Annamay Pierse (swimming) and Angela Whyte (track and field) all graduated from the school.
It was a much simpler time back then.
Gretzky became roommates with rookie Kevin Lowe the next season - the Oilers first in the NHL. The two lived at the Lord Nelson complex and 5125 Riverbend Road. It was probably pretty nice back then, though nowadays it's looking a little dated.
Of course, Edmonton being Edmonton, one thing that never changes is the cold winters. One of the great features Gretzky and Lowe enjoyed about living there was a nearby outdoor rink that was flooded. Can you imagine being one of the local kids playing hockey out there for hours, and then Wayne Gretzky and Kevin Lowe showed up asking if they could play?  It just doesn't happen anymore, but back then Gretz and Lowe did it all the time.
Another thing that doesn't happen anymore - riding your bike to work if you are a NHLer. NHLers all have fancy cars nowadays. And Gretzky probably had a nice ride back then too. But when the weather was a little nicer come spring time, Gretzky often rode his bike to the rink.
Those were the days....
at October 28, 2020