1985 NY Islanders: Only Team To Come Back From 2-0 Deficit in Best of Five Series

Fifty six times in NHL Stanley Cup playoff history have teams fallen behind 2-0 to open a best of five series.
Only the 1985 New York Islanders have successfully surmounted that deficit. 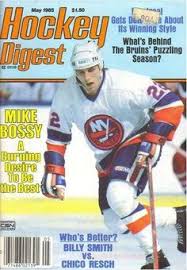 The Islanders were just a couple years removed from their dynasty days of four consecutive Stanley Cups. The core was still there - Mike Bossy, Denis Potvin, Bryan Trottier, Brent Sutter, Billy Smith, Clark Gillies, John Tonelli, Bob Nystrom. And the next generation had arrived - Pat Lafontaine, Kelly Hrudey, and Patrick Flatley. Despite a bit of a lackluster regular season that saw them go 40-34-6, they were a still formidable group.
The Washington Capitals had a fantastic season that year. They had 101 points with a record of 46-25-9. They scored 322 goals, with Mike Gartner and Bobby Carpenter both enjoying 50 goal seasons. But they were a team build on defense, allowing the second fewest goals in the league that season. They were led by Hall of Famer Rod Langway while the blue line also featured young stars Scott Stevens and Larry Murphy, both of whom would also find their way to the Hall of Fame. Pat Riggin and Al Jensen split duties in net, and shared the Jennings Trophy the year before.
The Capitals were developing a reputation as a power house team that could get never get out of the old Patrick Division. Their reward for such a strong season was home ice advantage against the intimidating Islanders.
It seemed the Caps were destined to shake their demons and advance to the division finals. They won the first two games for the commanding series lead, but it was not easy with overtime needed in both games. Alan Haworth scored early in game one (2:28) to give the Caps a 4-3 win. Mike Gartner scored in double overtime to give the Caps the 2-1 win in game two.
Interestingly, the Capitals could never decide who their goalie was going to be in this series. Despite getting the win in game one, Pat Riggin was replaced by Al Jensen in game two. He stopped 36 of 37 shots, including seven by John Tonelli. 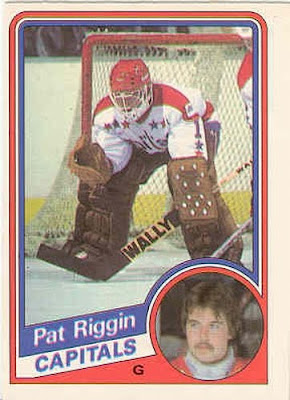 Jensen was given the net in game three as the Islanders mounted their comeback. Bryan Trottier and Brent Sutter were able to get the Isles back in the series with a 2-1 win.
Jensen returned for game four, a 6-4 loss. Mike Bossy led the way with two goals including an empty net goal.
For the decisive game five the Capitals went back to Pat Riggin, who had been their main starter all season. Riggin would stop 20 of 22 shots but the Capitals would lose 2-1. The story was really at the other end of the ice as the cagey playoff veteran Billy Smith made 39 saves to secure the win for the Islanders.
The Islanders would fall to the Philadelphia Flyers in a best of seven series in round two. Pat Riggin would be traded by the Capitals early the next season in exchange for Pete Peeters.
You can watch the entire game five of the Islanders-Capitals series right here courtesy of YouTube:
at August 03, 2020