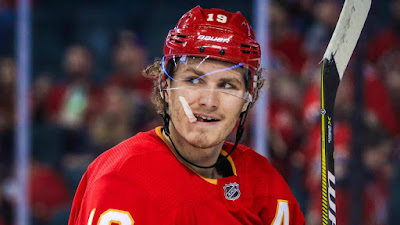 Saturday was a travel day for me, so I did not get to watch all of the exciting action on night one of the 2020 Stanley Cup playoffs. I did get a taste of the Montreal-Pittsburgh series and watched the Winnipeg-Calgary game in its' entirety.
Winnipeg sure has fallen into a rough spot early with what would appear to be a serious injury to their star player Mark Scheifele. The Jets seemed to reel in his absence as they just never got comfortable with all the line juggling.
Full credit to the Flames for an impressive win. There were many impressive performances, but boy oh boy does Matthew Tkachuk ever impress me.
As a rule of thumb I don't like the Calgary Flames. I don't know why. I just never have. When I think back as to the Cowtown players I've really liked over the years, it is a short list. Joe Nieuwendyk. Gary Roberts. Lanny McDonald. Jarome Iginla. Joel Otto. Ronnie Stern. Collin Patterson. Yes, I said Collin Patterson.
Matthew Tkachuk is a true gem. He's such a throw back player to another era, an intimidating physical focal point every night. "Chucky" is the ultimate villain, unless you are a Flames fan. Yet he can play the game as well as most. Smart and cunning, he understands the rhythm of the game and how he can impact it at any given moment, and that there are many ways to accomplish that besides scoring a goal.
The playoffs only amplify his effectiveness. He is the perfect player for every playoff battle. If I had to pick a dream team of current players to go to war with in a playoff series, Matthew Tkachuk would be a very high pick. You always look to fill the top center, top defenseman and top goaltender roles first, but Tkachuk is so impactful I'd make him my top pick for a winger. There are better scorers but he brings so much to the table that I'd take him that high.
Now none of this is new to anyone. He has been in the league for four years now and is about to really come into his own. His dad Keith Tkachuk was a supreme power forward in the 1990s, an era when seemingly every team has a superstar power forward. Nowadays the role has been redefined and players of Matthew Tkachuk's style are rare. Enjoy watching hi
at August 02, 2020