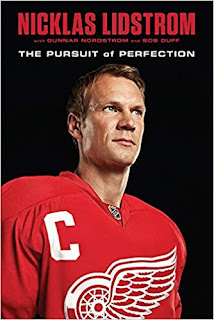 Nicklas Lidstrom has his autobiography out. It is a quick, easy read. Nothing terribly shocking or controversial in it, but a good trip down memory lane.

I particularly enjoyed the talk of his childhood and his admiration of the great Swedish and European hockey pioneer Borje Salming. Salming was the first European trained player to truly establish himself as a star in the National Hockey League.

When it comes down to the question "who is the greatest NHL European trained player ever?" both Salming and Lidstrom are near the top of the pack. Along with the likes of Alexander Ovechkin, Jaromir Jagr and Dominik Hasek

There is no shortage of candidates nowadays. When I was a kid it was basically Salming, a young Jari Kurri who still has never truly shaken the label of Gretzky's winger, and a few talented but at times enigmatic stars like Kent Nilsson and Hakan Loob.

Of course there were the Eastern Block stars, notably the Soviets, who were unable to play in the NHL. Igor Larionov and Viacheslav Fetisov in particular established themselves as solid NHL stars late in their careers but were never able to compete in the NHL in their true primes.

Nowadays Canadian kids grow up dreaming of being the next Teemu Selanne, Sergei Fedorov, Pavel Bure or Pavel Datsyuk. And with the likes of Elias Pettersson and Nikita Kucherov this is no trend, but something that will continue forever.

The greatest means who had the best career, made the most impact, had the greatest legacy. I will always rank Salming high in this regard, along with Ovechkin and Jagr. Best means who was the best player, and when you break it down I still think Sergei Fedorov as about as perfect of a forward as hockey has ever seen. And the same can be said of Lidstrom on the back end.

Who is the greatest? Who is the best? I don't really know, its too tough of a choice! I'm just happy to say I've seen them all and then some
at October 07, 2019

Sergey Makarov is a great shout as the best ever, in the celebrated KLM line he was by far the most skillful. He topped Soviet league points-scoring charts 9 out of 10 times from 1979-80 to 1988-89, the only time he missed out he was injured for half a season. He had it all, unbelievable speed, probably the fastest player of his era, great hands and he was tough as nails.
I have no doubts if he had played in the NHL in his prime he would be as big a star in North America as Wayne and Mario. Alas cause of injuries and age he wasn't as quick as before. Still Sergey had a very good NHL career but it could have been so much better...