What Does It Take To Win?

What does it take to win?

This is the question that, ultimately, everyone in pro hockey asks themselves every day. Even if they do not consciously ponder it daily, every move, every workout, every strategy meeting is designed to work towards answering that question. Because only the championship team at the end of the season has proven to have answered it.

Jason Farris obviously has similar interests. And he took it to a whole other level with his new book, It Takes 23 To Win. 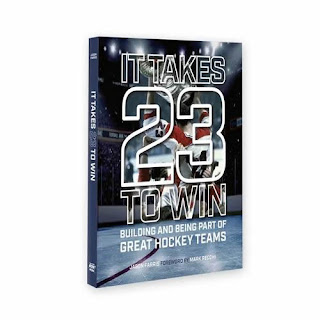 In it, he essentially asks 23 NHL veterans this question - what does it take to win? And he then has each of the 23 players pick an all time team of actual teammates that they would go to war with. And they add their commentary as to why these players are essential to a winning hockey team.

It's an amazing undertaking - one that is almost too large for one book! - but this is not about all star dream teams here. Farris constrained each of his participants by forcing them to build as realistic a line up as possible. There is no stacking the 4th line with superstar scorers here. The fourth line has to be made up of fourth liners. There are quality third line role players, depth defensemen and true back up goaltenders.

This is the real value of the book. As each player names his team, the real answer to the question of what does it take to win is revealed. What are qualities and traits are these players looking for in their teammates? What makes a great first line, or quality role player, or final minute of play defenseman? We are familiar with many - though maybe not all - of the players selected, but it is the why they are selected is the key.

Farris' line up of players is also just as varied. Farris, who is well connected in hockey circles and formerly worked for the Dallas Stars as Chief Operating Officer, enlisted an interesting blend of superstars (like Dominik Hasek, Joe Nieuwendyk, Frank Mahovlich and Mark Recchi) to role players (Brad Marsh, Terry Ruskowski, Bob Bassen and Brad May). It's like a real team - and purposely down this way.

The book truly does "put you in a dressing room stall between a Hall of Famer in his prime and journeyman checking forward who's taking you under his wing." We get the varied perspectives, seeing the contributions of every role from varying vantage points.

As always, a Jason Farris book amazes. Self published under his own Circa Now Media banner, no one is better at presentation. The book's layout and graphic work is the dream of every author and should be the goal of every publisher. This particular book tones down the splashy presentation to a degree compared to some previous Farris offerings, and I think it is actually for the better. It is a perfect mixture of eye catching display without commanding the attention of the reader from the true gem of the book - the written content.

The book does not truly answer the question. What does it take to win? There are no shortages of hints and quotes as to all the necessary ingredients, but there is no summary. There is no blue print which answers the question definitively. I'm sure every coach, every organization, every leader has such a blue print and they try to fill the identified roles with the players and coaches with the desired attributes. I would love to see these blue prints.

Of course Scotty Bowman and company are not exactly just going to show you. So this book fills the void. The reader is left to piece it all together and figure it out for themselves. What are the essential contributions of every role on the 23 man roster? What is needed not just on the ice, but off of it, too?

The book really makes you think, and that is the great fun of it.  There is no uniform answer. But the book challenges you to come up with your own answer.

The book does get bogged down a bit with some supplementary material. Now the material in and of itself is all fantastic stuff. Some of it could be expanded into bigger projects on their own. There are some great historical elements, like the history of hockey team photos and team travel; sections on international hockey, women's hockey and sledge hockey; plenty of features on team programs and hockey cards. I don't mean to complain about these fantastic add-ons. I just question whether they take away some of the main focus of the book.

The book is pricier than most at $59.95. But bottom line is any Jason Farris book is worth the price. Like I said already, the presentation is always second to none. The content of this book in particular matches that. It will remain within easy reach for me all hockey season long as a must read and return to frequently.

Get the book at 23towin.com