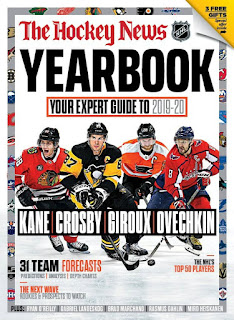 Ask any hockey researcher what his or her hockey researching dream is, and they will likely tell you they want digital access to The Hockey News 72 years of archive history.

Now it is about to happen.

In the recently released The Hockey News Yearbook, new magazine owner W. Graeme Roustan announce the archives - complete from the first issue in 1947 to the current edition - will be available for the Gold Members subscription package. That's $50 a year - a very reasonable price.

Jason Kay and Tim Beever believe the project will be up and running before Christmas 2019. I am going to need some time off during the holidays to go through more than 100,000 pages of hockey history!

It's also great that Roustan owns The Hockey News. He is a businessman but also a true hockey fan who will see that the magazine remains not only alive but relevant under his stewardship. These are tough times for the print media industry, but excellent times for hockey fans.
at September 13, 2019