Ivan Was Not Terrible 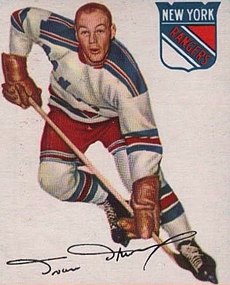 There was an old-time New York Ranger press agent by the name of Herb Goren. It was his job to get the Rangers in the newspapers and capture a part of the entertainment pie in Manhattan. He would often hype up players in attempts to make them household names in the Big Apple.

Goren quickly dubbed Ivan Irwin as Ivan the Terrible. However it was never quite determined whether Goren was referring to his short temper and rugged style of play, or his lack of talent!

When Irwin was on the top of his game, the tall, balding defenseman was a sensational bodychecker, and played with a meanstreak that made other coaches envious. But when he wasn't on his game, Irwin was exploited by his poor skating abilities. Faster players would take their chances on getting creamed, knowing that if they could get the extra step on the less-than-mobile Irwin they could be in home free on the Rangers net.

Irwin was originally property of the Montreal Canadiens. After playing just 4 games in Montreal, he was traded to the Rangers for Eddie Slowinski and Pete Babando. In his first minor league call up to the Rangers he replaced none-other than team captain Allan Stanley.

For the next three years he was a mainstay on the Blue Shirts blue line. He was most noted for his fistic skills, memorably fighting Lee Fogolin Sr, and, believe it or not, his own defensive partner Leapin' Louie Fontinato in practice one day. Coach Phil Watson was surprisingly quoted as being pleased by the teammate fight because they were showing passion but his like for Irwin dissipated over time. After three seasons Irwin, who also tag-teamed with the great Bill Gadsby at times, would be banished to the minor leagues, reportedly in part due to a disagreement with the coach.

The Chicago-born Irwin continued his career in the minor leagues. In the NHL he totaled 155 games, 2 goals and 29 points.
at February 12, 2019