Questioning Bobby Orr's Status As Greatest Defenseman Of All Time


Hockey fans love to debate about pretty much anything. One of the most contentious debates is who is the greatest hockey player of all time? General consensus has Wayne Gretzky, Gordie Howe, Bobby Orr and Mario Lemieux as the top four, in varying orders.

But one order that almost never varies is the ranking of the greatest defensemen. It is not open for debate at all, actually. Bobby Orr outdistances everyone else - Raymond Bourque, Nicklas Lidstrom, Doug Harvey, etc - by such a wide margin that to question it is not only sacrilegious but gets you dismissed in the hockey community almost immediately.

Unless you are Stan Fischler that is. 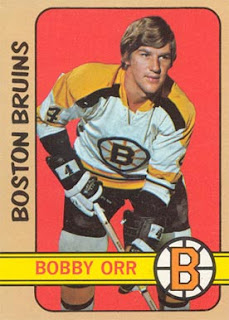 In 1983 Fischler wrote his epic hockey book Hockey's 100: A Personal Ranking of the Best Players In Hockey History. Many refer to this text as the original attempt to list hockey's absolute best in order. Bobby Orr ranks 13th, behind defensemen Eddie Shore (2nd), Red Kelly (3rd - he did play the 2nd half of his career as a centre), and Doug Harvey (9th). Cyclone Taylor, who sort of was the Bobby Orr of his day though he played the now-extinct rover position, was 8th.

(Right winger Gordie Howe topped the list. Wayne Gretzky was ranked 10th, which is fair enough given it was 1983 and he was only 4 years into his NHL career).

In 1988 Fischler updated his rankings with his All New Hockey's 100. Howe still topped the list, with Gretzky moving to 2nd. Orr remained 13th, with Shore 3rd, Kelly 4th and Harvey 9th. Taylor was dropped off the list entirely somehow, but Denis Potvin moved to 12th - directly ahead of Bobby Orr.

In 1993 Fischler again listed his top 100, this time in simple bullet form in a book called All Time Book Of Hockey Lists. He remained consistent with all players except Howe moving down a notch. Mario Lemieux ranked as the new number two, while Shore, Kelly, Harvey and Potvin all outranked Bobby Orr.

I've always wondered what was Fischler's motivation in this seeming attack. At first I dismissed it as shock value. Even in 1983 Fischler was a veteran of many published hockey books and he knew such controversy helps sell product. But he has been very consistent in his unusually low ranking of Orr, when pretty much no one else would dare to rank Orr behind any other defenseman. No one else dares to rank Orr outside of the top five greatest players of all time, let alone rank him 13th!

Fischler does suggest in his text that "One reason for Bobby Orr's relatively low rating is the indisputable fact that he played during the NHL's first decade of expansion (1967-1977) when the game's quality was at an all-time low. By contrast, Doug Harvey, who in my estimation was a better defenseman than Orr, starred during the NHL's pre-expansion era when overall quality and competition were at their zenith."

Fischler has a point to some degree. The key to his stance is that he remains consistent with it with only Potvin as a post-1967 defenseman moving ahead of Orr. It is not to be discounted as there are some real old-timers out there who quietly believe Doug Harvey was the best ever.

But I always suspected there was more at play here than just trying to be unique or shock value. I actually wonder if there is something personal about Orr that hurts his ranking in Fischler's rankings.

This past summer I was re-reading Fischer's 1973 classic Slap Shot - perhaps my favorite Fischler book of all time. He gets downright critical of Orr in a chapter called "At War With Bobby Orr," claiming Orr hides behind medical tables to avoid the post-game media in order to keep his squeaky clean off ice image in tact. Using negative overtones at every chance he can get, Fischler repeatedly mocks Orr's off ice reputation and asks if there is really a Bobby Orr, or just the boy scout that Orr, his family and his agent, Alan Eagleson at that time, wanted portrayed.

Fischler even talked about how his friendship with Orr fell apart over Orr's quest for privacy and control of his image. This all dated back to articles for MacLean's and Sport magazines. Orr was said to have disliked the articles and in particular the choice of a photo and stopped talking to Fischler.  Fischler talked about Orr and his family's growing disenchantment with the media altogether.

The problem for Fischler became he had already signed a deal to write a book about Orr in 1970. The book turned more into a history of the Boston Bruins as Fischler as Orr did not cooperate enough for the original scope, at least in Fischler's view.

Stan Fischler's personal rankings have made for some great reading and some great debate over the years. His controversially low ranking of Orr has always been a source of contention, and some say a blow to the recurring project's credibility. I don't think it is the low ranking itself that hurts his credibility so much as the key word "personal." Unfortunately Fischler seems to use his personal opinion of Orr off the ice to cloud his judgement of Orr's on it - the only place Fischler or any of us is qualified to judge Orr.

But kudos to Fischler for doing what pretty much no one else will do - question if Orr is the greatest defenseman of all time. It seems there is Bobby Orr on a level all to his own, and then there is everybody else. I personally believe Orr is the undisputed best, but I wonder how much of that is due to hockey's culture that insists there is no questioning this sacred truth. I just find it odd that it is pretty much the only hockey topic written in stone.

Fischler's stance has helped dismiss him, somewhat, in the hockey community. Everyone respects him as an incredible story teller, but perhaps not so much as an expert, and his ranking and criticisms on Orr (and for a while on Gretzky) contributed to that. But no one questioned Stephen Brunt's credibility in 2007 when he came out with the ultimate book on Bobby Orr - Searching For Bobby Orr. In a more subtle way Brunt essentially continues Fischler's search by looking for the real Bobby Orr, not necessarily the man on the ice or the boy scout reputation. Brunt found critical and commercial success, if not the real Bobby Orr, in what amounts to the pre-eminent text of Number Four

If there is one thing other than Bobby Orr's status as the greatest defenseman of all time that can not be questioned it is Bobby Orr's long quest for privacy. He has always kept away from the media and sheltered his image. Which leads us to 2013 where the 65 year old Orr is seemingly more open to the media these days, and comes across as very affable. He is also coming out with his long awaited autobiography - Bobby Orr: My Story. Just don't expect any surprises. 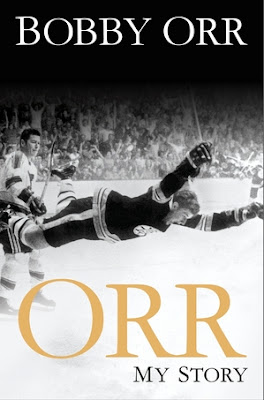 Well said. I did send a rebuttle to his 1983 ranking ( obviously I already had Wayne at #1 and Bobby Orr at #2 ) and I never got a reply . At the time I had no idea of his feud with Bobby Orr , but that would at least make sense of an otherwise indefensible ranking .

Great fun,
Hockey is a game of skill and passion, were to be succesful,one needs superb hand eye,skating skill,brilliant reflexes and an overall ice generalship.

A lot of players had portions of that, but Orr had them all. Gifted is the word. A joy to watch,when he stepped on the eyes my focus was riveted on this gifted perso.

I saw him play as a pint sized underage defence for the Generals. He was a pint sized giant . Star on the ice. Incredible how such a little fellow at 14 could hold his own against behemoth type talented players.
Never will we see that again.
Alls met him in General Motors, a perfect gentleman in that environment as well. The day players of his caliber retire it gives one a melancholy feeling.
Never will I forget the excitement when he stepped on the ice, electrying.
Nico a fan of hockey

Frankly, I concur with Fischer in his ranking. For one, Gretzky's longevity earns him number one ranking over Lemieux, who'd otherwise outscore him and maybe win more Cups. So why did they change the bar for Orr, who had an even shorter career? Secondly, shouldn't defenseman be ranked first and foremost for their ability to stop the puck before their ability to score? Orr was good defensively, but there are plenty of other guys who are better at preventing goals, even if they're not as good offensively. Thirdly, all this talk of Orr changing the game is somewhat overrated. He wasn't the original offensive defenseman, Red Kelly, Doug Harvey, and even Eddie Shore were offensive guys who were also better defensively than Orr. Fourthly, speaking of longevity, Orr's play wore him out prematurely, while brainy guys like Lidstrom, thrived into his late thirties, winning cups and Norrises.