I love learning about the lives of hockey players. What it takes to make it. The sacrifices they endure. The obstacles they overcome. The highlights they achieve. Throw in a few good stories along the way and I'm hooked for a good read.

I did not previously know a whole lot about Miroslav Frycer. I knew his on ice story, including his disastrous relationship with Leafs coach John Brophy. I knew some of his story regarding his defection from Eastern Europe, but not all the fascinating details. And I knew he's had some health problems later in life. 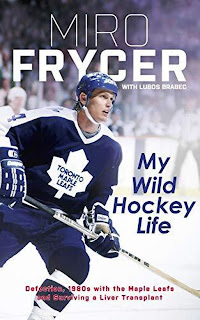 But it turns out I only knew a fraction of his story. With his autobiography (written with countryman Lubos Brabec) translated to English and now available in North America, we can learn what a fascinating story Miroslav Frycer's life has been.

The book is titled "My Wild Hockey Life," and we quickly that this is a book that truly lives up to it's title. In fact, wild may not be an accurate enough.

He grew up in communist Czechoslovakia, but dreamed of freedom in the Western World. Mostly he wanted to be like his heroes, the Stastny brothers, and play in the NHL.

Daring and complicated defection plans were successful to see him (and his parents, wife and child) come to North America and join the Stastnys with the Quebec Nordiques.

The stay in Quebec would prove to be relatively short, as he was moved to Toronto. It was there that he ran into coach Brophy, with dire consequences.

Brophy's challenging of Frycer was way beyond a hockey coach trying to get more out of a player. It was true dislike, possibly because he was the foreigner in a hockey world not yet fully accepting of them. It became a personal feud that ruined Frycer's career and led him to begin drinking excessively.

How bad was his drinking? He was out of hockey by 30, and nearly dead at 40. His drinking led him to kidney and liver transplant surgeries with just a 20% chance of survival.

Survive he did, and he even returned to the ice, as a coach. He's unable to skate due to an old hockey injury to his hip, and he requires medical check ups every second week.

Its a wild ride and a scary story. It is a story Frycer wants told, so that others stay away from the same pitfalls with alcohol
at October 28, 2018