The Top 100 Goalies Of All Time 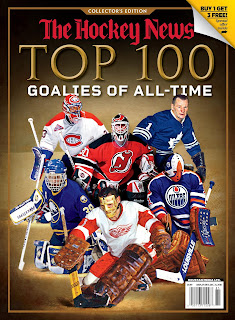 The Hockey News has a new collector's edition magazine out featuring the top 100 goalies of all time.

It is a beautifully produced periodical, full of great photography and excellent writing. I thoroughly enjoyed the project, and for the most part agree with their expert panel's rankings.

It is interesting that top six goalies are almost universally accepted. This includes three Original Six greats, and three modern stars. Any one of these six could be chosen as the greatest, and it would not be wrong.

My personal bias give Plante the edge of the Original Six era. Legacy should be an important part of any equation of the greatest anything. Plante literally changed the face of hockey by championing the mask, but was also instrumental in changing the way a goalie plays in many ways.

A note about Glenn Hall. Back in this era the Vezina trophy did not necessarily go to the best goaltender, just the goaltender on the team who allowed the fewest goals. Hence, it makes sense that the goalie named to the First Team All Star Team is essentially voted as the best goalie that season. Hall was named seven times, while Plante and Sawchuk were named just three times each. All three were named to the second team four times. In an era where the three superstar goalies all played at the same time, that's a pretty impressive accomplishment for the man they dubbed "Mr. Goalie."

Sawchuk is honestly a goalie I probably don't appreciate enough. I do not disagree he was the best of these three goalies in terms of ability. His numbers, accolades and longevity are impressive in every way.

When it comes to the contemporary trio of Roy, Hasek and Brodeur, there can be no denying three truths:

1. Martin Brodeur's longevity saw him post career totals that dwarf everybody. He was so good for so long.

2. Patrick Roy is hockey's ultimate playoff warrior, winning four Stanley Cups and three Conn Smythe Trophies as playoff MVP. If you have a one-game-winner-takes-all showdown, you want Roy in net.

3. Dominik Hasek had the highest peak of any goalie in history, winning six Vezina trophies in eight years. All three of these goalies played at the same time, but during that span there was no doubt Hasek was the best goalie, if not the best player in all of hockey. And Hasek played on the weakest team.

Hasek seems to get dinged because he did not become a NHL starting goalie until the old age of 28. A lot of that had to do with international politics that prevented Eastern Bloc stars from leaving their countries to come to the NHL.

In my mind, the rankings of each era should rank as such: Plante, Sawchuk and Hall; Hasek, Roy, and Brodeur.

Comparing eras is a tough thing to do, especially since, generally speaking, modern goalies are significantly better athletes, better coached and better equipped.

In my top 100 players of all time ranking a couple years back I ranked them in this order: Roy, Hasek, Plante, Sawchuk, Brodeur and Hall. But something is really gnawing at me to move Hasek up.
at October 25, 2018