J.P. Bickell: The Life, The Leafs, and The Legacy 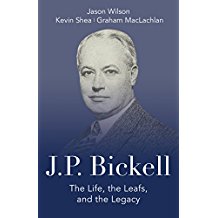 I have to admit this one surprised me. I mean, why would I, a western Canadian hockey fan, care about the businessman who financed Conn Smythe's Toronto Maple Leafs? That was how many years ago? And, ugh, yet another Leafs book, and this one about some guy no one has ever heard of? But J.P. Bickell: The Life, The Leafs and The Legacy is a fascinating read.

It's a fascinating read mostly because, as it turns out, this is not a hockey book so much as a Canadian history book (well, maybe Ontario history). It just so happens that J.P. Bickell was an incredibly important figure and continues to be many years after his death.

Bickell was a self made millionaire mining magnate who left an enduring legacy not only on the entire industry but the many communities who benefited from such development.

That made Bickell a very wealthy person, and he spread his wealth around. He was instrumental in the founding of the Famous Players movie theatre chain - think about that when you go to the movies next time. He fought in World War II and became very interested in aviation. And he was a great philanthropist. In fact half a century after his death his foundation continues to give away his money to hospitals, scholarships, art galleries and children's camps.

Bickell was also a financier of many sports, most notably the Leafs and Maple Leaf Gardens. He also was involved in boxing, boat racing, baseball and golf.

See, this isn't just another Leafs book. Far from it.

When The Moon Comes 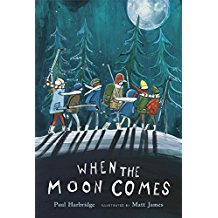 Author Paul Harbridge and illustrator Matt James have teamed up to bring us the fantastic new hockey-themed children's book When The Moon Comes Out.

It's about hockey at it's best - kids playing shinny on the frozen pond. Only this book takes place in the dark of the night, with only the full moon to light the way. Anyone who has ever played the game this way understands what a unique experience this is.

James' brilliant use of colour truly captures the dark and cold so that you can almost see your own breath. Okay, not quite, but it does give you the chills of the black night and really sets the atmosphere for the story itself.

Harbridge's story matches the visual sensations, taking the readers on a nostalgic journey to a simpler time when hockey was beautiful.

Think I'm wrong? Well the people who shortlisted the book for 2017 Governor General's Award for Young People's Literature are on my side. 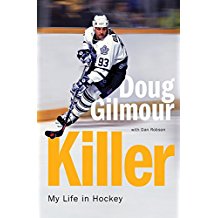 Doug Gilmour tells all in his autobiography Killer, as told to Dan Robson. It's a story of the Canadian Dream as the hockey-loving kid makes it all the way to the big leagues. He was one of the premier players in his day, and became near-immortal as the heart and soul of the Toronto Maple Leafs for a short time in the 1990s. He was arguably the best player in the world for some of that stretch.

That Toronto connection instantly puts this book on the best sellers list, as too many of the Maple Leafs books tend to do. The endless line of Leafs fans will enjoy this book, as will many other hockey fans from Gilmour's era. He was a well travelled superstar, extending his fan base.