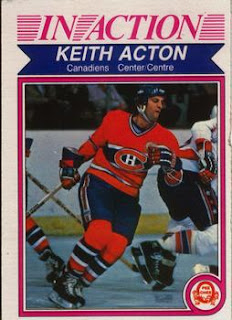 From his very first NHL game right through to his 1023rd and final contest, Keith Acton played the same way - all out.

Acton was an energetic checking forward. He was hard working and honest, yet aggressive and feisty and almost always yapping his mouth at the opposition. Throughout his career he was often compared to Ken Linseman.

Acton and Linseman played very similar roles, although Acton never had the same offensive contributions as Kenny. Acton did have a great sophomore season in Montreal when he scored a career high 36 goals and 88 points but otherwise he was cast as a third line utility center - a role he excelled at.

Acton was small at just 5'8" but he played a physical game. He was very willing to hit and be hit, and never shied away from traffic. He was also very liberal with his stick, often using it to distract opponents more than to score goals. Blessed with great straight-ahead speed, Acton was great at jumping into openings all over the ice. And you can bet that if you tried to hook him back when he did surprisingly jump ahead of you, he'd dive with the perfect touch of embellishment, thus drawing the referees attention and more often than not got his team a power play.

Besides good foot speed, Acton had a nice package of finesse skills. He had good hands and was creative enough to set up his wingers, however he lacked a good shot at the NHL level. Thus most of his goals came from banging at loose pucks near the net. Acton did have good hockey sense, particularly in his defensive role. His persistent puck pursuit and excellence on face-offs also made him a mainstay on the penalty killing units.

Acton was originally a late round pick of the Montreal Canadiens. Despite back to back 120+ point seasons with the strong junior organization Peterborough Petes, Acton wasn't selected until 103rd overall in 1978 as questions about his size underrated him. After a couple of years in the Habs farm system, Keith made the big jump to the NHL in 1980-81 in a limited role, playing 61 games with 15 goals and 39 points.

As mentioned earlier, Acton exploded for his 88 point season in year two, but because of the Habs strong depth at center ice he was relegated to third line duty in 1982-83.

After a strong start to the 1983-84 season (10 points in the first 9 games), Acton was traded to Minnesota as a key part of package that landed big center Bobby Smith in Montreal. Smith went on to record several strong seasons in Montreal. Acton failed to put up the offensive numbers that were hoped for, but he was a valuable member of an often weak Stars team. Acton was a strong leader on the team.

The Stars moved the speedster to Edmonton during the 1987-88 season in exchange for Moe Mantha. Acton played with a yeoman's effort as he helped the Oilers capture the 1988 Stanley Cup.

Part way through the 1988-89 season Acton was moved to Philadelphia where he would play for the following 4 years. He spent the 1993-94 season, his last in the NHL, with Washington and NY Islanders.

Keith Acton, always a popular leader in any dressing room he was part of, turned to the world of coaching after his playing days were over.
at December 01, 2017