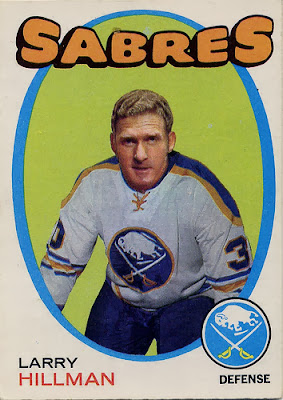 Larry Hillman saw more cities, more buses and more trains and eventually more airplanes than most hockey players. The 22-year pro defenseman played for 17 different teams in four leagues. He once said his own father had difficulty keeping track of the whereabouts of his own son. .
Self described as an average defenseman, "not great or anything" who "could handle most situations," Hillman's NHL career started way back In 1955 with the Detroit Red Wings, joining the team at the completion of his final junior season. He played in 6 regular season games and the in three playoff games en route to winning the Stanley Cup win.Hillman struggled a bit in his first full NHL season of 1955-56. At one point he was even demoted to the AHL where he played with the Buffalo Bisons. He was recalled to the Wings in time for a second playoff run to the Finals, though the team would unsuccessfully defend the championship.For most of the 1956-67 season he was farmed out to Edmonton of the WHL, but returned to the NHL the following season with the Boston Bruins. Over the next three seasons he would solidify his reputation as a steady journeyman known for lifting the puck high above everyone's head when clearing the zone. But by 1959-60 he was back in the AHL, this time with the Providence Reds, and this time being named the Eddie Shore trophy winner as the AHL's best defensemen.In 1960 Hillman was both lucky and unlucky to join the Toronto Maple Leafs. It was a dream come true to play for the Leafs, and he would be part of two Stanley Cup championships (1964 and 1967). But the Leafs were deep with veteran defensemen, and Hillman spent a lot of time bouncing between the Leafs and their AHL farm team in Rochester. Hillman was usually the first player called up when injuries took their toll.