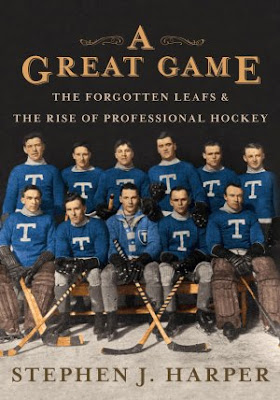 The Canadian public got its first look at the title and cover for Prime Minister Stephen Harper’s long-anticipated non-fiction book about the early days of professional hockey.

Set for release on November 5, A Great Game: The Forgotten Leafs and The Rise of Professional Hockey tracks hockey from the first years of Canadian confederation to the First World War.

A promotional website launched by publisher Simon and Shuster promises the book is “a fascinating look at the hockey heroes and hard-boiled businessmen who built the game” and features a one-minute video showcasing black-and-white photos of early hockey teams against a triumphal soundtrack.

Notably, the website makes no reference to the day job of author “Stephen J. Harper,” but assures that he writes with a “fan’s passion.”