The Most Important Day In Hockey History?

From Brian Conacher's 2007 book As The Puck Turns:

"Most Canadians think Paul Henderson's last goal is the most significant event in Canadian hockey history. It may well be the most dramatic and most exciting goal in Canadian hockey history, but I'm not sure it's the most important event. I believe that occurred at the end of game one, when the game of hockey in Canada, the NHL and the rest of the hockey world changed forever. By the end of game one the myth of NHL supremacy and invincibility was dispelled forever, and a new era and order in hockey began. Paul's goal temporarily saved Canada's pride, naively supporting a false sense of security that Canada was still the undisputed supreme hockey nation. But after that first game in the Montreal Forum on September 2, 1972, nothing in the hockey world was ever the same. It was the watershed for all that would follow, bigger, more far-reaching and more important even than Henderson's goal.

The series started in one place in the hockey chronology and ended in a very different one. Seven games, fifty nine minutes and twenty six seconds after the opening faceoff, Henderson's electrifying goal in game eight made us all forget how the Series began. The euphoria of the dramatic win clouded the reality of the event. Most people thought Canada was again the top hockey nation. I thought that was a strange reaction to the win. For a series where most predicted the Soviets would be lucky to win a game, I'm amazed hat we gloat over "our victory," Canada's greatest moment in sports history, a victory won by a generous dose of good luck and the slimmest of margins. In the long run, it might have been better for Canadian hockey development had Team Canada lost." 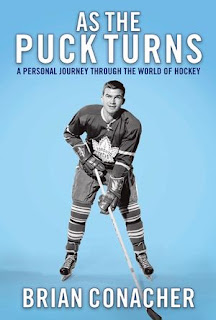 That was just a brilliant passage by a man who had the best seat to watch the 1972 Summit Series. He was Foster Hewitt's broadcasting partner for all eight of the games.

Conacher, who previously had represented Canada with the 1960's Canadian national team, is an interesting guy with amazing stories about hockey to tell. He compiled many of them in his 2007 book As The Puck Turns.