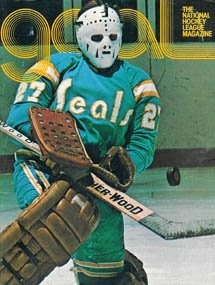 Judging a hockey player based on his stats often leads to inaccuracies, particularly when it comes to goaltenders. Gilles Meloche is the perfect example of this.

He surrendered 2756 goals against, more than anyone else in history. His 270-351-131 career record is pretty weak, and his 351 losses is only one shy of the NHL record - set by Hall of Famer Gump Worsley, who played nearly 900 games.

One would decipher from those stats that Gilles wasn't a very good puck stopper. But in actuality nothing could be further from the truth. Quick, agile and a tremendous attitude were his trademarks. Meloche was a very good goalie on some VERY bad teams. If Meloche had played in Montreal during the 70s and Ken Dryden played in Oakland and Cleveland, then we very well might be saying Meloche is one of the all time greats and Dryden would be the one with the poor numbers.

Gilles actually got his start in the NHL with Chicago. He was a happy 70th overall draft pick of the Hawks in 1970 as Gilles grew up idolizing Hawk legend Glenn Hall. Meloche played his first pro year with the IHL's Flint Generals but did appear in two NHL games when Hawks backup Gerry Desjardins broke his arm. It was a good debut for Gilles - he won his first two starts - 6-4 in Vancouver and 5-2 against the California Golden Seals.

Those were the only two games Meloche ever played for Chicago. In the summer the Hawks sent Gerry Desjardins to Oakland for Gary Smith. However Desjardins' broken arm had not healed properly and the NHL nullified the trade. The two teams agreed to new terms and this time Meloche and defenseman Paul Shmyr were sent out west.

An interesting story happened immediately after the trade. Shmyr and Meloche disappeared for the next three days. There was much speculation that two would not report to California as they never showed up for their flight. However Shmyr had wanted his car with him out west, so he convinced the young Meloche to join him as they drove 3 days across the country!

You probably wouldn't have blamed anyone for not wanting to go the Seals franchise though. Soon the WHA would raid their roster and they became the NHL's doormats. But Meloche very much enjoyed his time there and looks back on it fondly.

"Oakland didn't have a very good team for most of my time there, but those were good years for me because I was in my early twenties and playing 50 to 60 games a year. I just wanted to play the game. When you're losing three games out of four, four games out of five, its easy to lose your confidence. But I was getting great press and the fans were always with me. I just enjoyed playing the game and I was having fun so I really didn't mind my days in Oakland. I was in the NHL and that was all that mattered," remembered Meloche in Dick Irvin's great book In The Crease.

With such an awful record the Seals were having trouble making a go of it in Oakland, and the team finally moved in 1976 to Cleveland and became the Barons. Meloche accompanied the team to Cleveland, but as Gilles recalls, not much changed.

"In fact it got worse. Nobody went to the games. It didn't feel like the National Hockey League with only 5000 or 6000 fans in the stands. It wasn't run like a big league team and it was the only time I went into a team's office and asked to be traded.

The Barons wouldn't move Meloche however, as he was one of the very few bright spots.

In 1978 the Barons merged with the Minnesota North Stars. Meloche described his time in Minnesota as "the best time in my career."

"The North Stars had finished in last place overall the year before and they ended up picking Bobby Smith, Steve Payne and Craig Hartsburg in one draft. My first year there we missed the playoffs by three or four points but we made them the next six years and they were great years."

In 1980 the North Stars faced off with the 4 time defending Stanley Cup champion Montreal Canadiens. The heavily favored Habs were looking for their unthinkable 5th Cup in a row! But Meloche and the Stars had a different idea. Meloche was brilliant - so brilliant that long time hockey broadcaster Dick Irvin said "Meloche's goaltending in that series rates among the best I have ever seen in the playoffs!"

Meloche, who had been criticized for not being a "big game" goaltender, shook that label with a 3-0 shutout victory in the Montreal Forum in game one. The very next night the Stars again shocked the Habs with a 4-1 win! The Habs stormed back in the next three games and took a 3-2 series lead, but the Stars continued to fight on. The Stars forced a game 7 with a 5-2 win in Minnesota in game 6. Then the exciting game 7 showdown in Montreal was played. Minnesota's Al MacAdam scored the winner on Denis Heron with around 2 minutes left to play as Meloche backstopped the Stars to one of hockey's biggest playoff upsets.

"That was the greatest thrill of my career" later admitted Meloche.

The Stars bowed out to Philadelphia in the next round of the playoffs, but the next year they made it all the way to the finals where they met the New York Islanders, who won the Cup in 1980. It was an exciting ride for the Stars and their fans, but Meloche knew they were heavy underdogs.

"You know, you get into a series where you don't think you have too much of a chance to win and that's bad because the mental edge has something to do with it. We weren't really in the series but it was still a thrill. I remember losing on the Island and seeing the Stanley Cup on the ice. You know then why its something everybody dreams about."

Meloche continued to play with the Stars until the conclusion of the 1984-85 season. After talking contract with the Edmonton Oilers, Meloche was put on the trading block. There was some serious thought that the Montreal Canadiens were interested in Meloche as Doug Soetart was apparently unhappy in Montreal. Meloche would have loved to finish his career in Montreal, but that did not materialize.

Gilles finally landed in Pittsburgh where he finished his career with 3 more seasons. Following his playing days he became a goalie consultant and scout for the Pens.

I was a kid in the Oakland area and was a big fan of Gilles and the Seals the final two years he was here. Only a goalie of his caliber could face such a shooting galley night after night.
The guy was so professional and I remember those days fondly. Glad he does, too.
GO SEALS GO!

I remember the playoff run with the North Stars...... He was my favourite back then..... Great article!