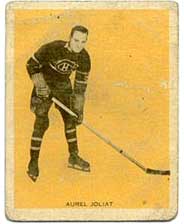 Affectionately known as "Mighty Atom" or "Little Giant," Aurel Joliat starred with the Montreal Canadiens from 1922 to 1938.

Aurel was lucky to play at all. As a teenager he fell off a roof, tumbled 35 feet to the ground, and landed on his back, narrowly escaping any serious injuries. And he played 13 seasons in the NHL with two displaced vertebraes, which caused him great pain and forced him to wear an elaborate truss at all times. He also suffered from stomach ulcers that he mostly ignored.

Aurel was tough enough to become a star kicker with his hometown Ottawa Rough Riders. If it wasn't for a broken leg, maybe Aurel would be known as one of the greatest football players of all time. The broken leg eventually led him to concentrate on hockey.

Aurel joined Montreal in 1922 under an intense microscope. He had been playing out west with the Saskatoon Sheiks when Montreal traded the already legendary but fading Newsy Lalonde for the "unknown kid." During the 1923-24 season he was teamed with Howie Morenz and Billy Boucher and went on to become one of the truly great left wingers in NHL history.

"I can't say that I played with Morenz," Aurel once said with a smile. "Although I tried to. Morenz was so fast I had to scoot well ahead of him on a rush or I was always lagging behind him, trying to catch up."

Aurel rarely played at more than 140 lbs, which was extremely small even back then. Aurel was a marvelous stickhandler and had an unusual abundance of "hockey sense," he simply did the right thing at the right time.

One Montreal writer of his era said, "He rolled away from 200-pounders, faded from the path of charging rivals and sidestepped and hurdled his way clear of smashing body-blows, flying elbows and jabbing butt-ends. His amazing quickness saved him from untold punishment over the years and kept him going like a brook, apparently forever."

"Oldtime hockey players like me were the dumbest bunch of athletes in the world," Aurel once said. "We never got paid what we deserved and most of us didn't have sense enough to save what money we got."

Despite six shoulder separations, three broken ribs, and routine injuries such as five nose fractures, Aurel went on to score 270 goals, tying Morenz on the all-time list. He was also an outstanding checker, capable of stopping an opponent and then quickly starting a rush of his own.

"Well, I guess I was tough enough," Aurel said in later years. "You had to be to survive. But I wasn't the toughest. That mule-headed son-of-a-bitch Eddie Shore was the meanest, toughest player I ever met. I was rushin' up the ice at the Forum one night when my lights went out. Shore hit me with a check that almost killed me. I was what? 130 pounds at the time and he must have been 190. He dislocated my shoulder and they carried me off in a lot of pain. Then I look around and Shore is leading a fancy rush. Forget the sore shoulder. I leaped over the boards and intercepted the big bugger. Hit him with a flyin' tackle. Hit him so hard he was out cold on the ice. He had it comin' I'd say . . ."

Aurel was also known for a strange idiosyncrasies. For example, he wore a black baseball cap while he played, and wouldn't chase the puck without it. He was often the target of opponents who would swipe at that cap with a gloved hand. If they managed to dislodge it, a mighty roar of yeas and boos followed from the crowd. Aurel always retrieved his cap and put it on again to cover his bald spot. This lack of respect always infuriated Aurel, who played his best hockey when it happened.

And if Aurel didn't score then he saw to it that he slashed the cap-disturber across the ankles with a two-hander. Aurel was also noted for taunting his opponents, needling them until they ended up making mistakes.

After the 1937-38 season Aurel retired from hockey, although he disagreed with that.

"Retired hell!" he'd often snort. "They fired me when the Montreal Maroons folded and some of their players moved over to the Canadiens. I'm still damn mad about that."

The late Bill Galloway, a hockey historian and one of Aurel's best friends, recalled a time when Aurel, then in his 70s, was invited to Boston for a reunion of living hockey legends. Among the celebrities was Punch Broadbent, another tough customer who had been a thorn in Aurel's side throughout their playing days.

In the press room prior to the dinner, the two oldtimers became embroiled in an argument over an incident that had occurred in a game played back in the '20s. Soon they were nose to nose and their voices, raised in anger, silenced the other conversations in the room. Then punches were thrown and a dandy fight developed.

Finally, scratched and bleeding, the two old adversaries were pulled apart by half a dozen bystanders. They were marched off to their rooms and told to cool off and behave themselves. But the fight wasn't over. Moments later Aurel barged into Broadbent's room, flew at him with clenched fists, and round two was underway. Once again the peacemakers came running.

Finally, stated Galloway, NHL president Clarence Campbell was called and persuaded the two legends of the game to call a truce. By then they were so battered and bruised Campbell barred them from a group photo of the celebrities and told them to forget about attending the dinner that night. "Order room service and we'll pay for it," he barked as he departed. The following morning, Aurel was seen roaming the hotel lobby. "I'm looking for my old pal Broadbent," he told acquaintances. "I'd like to buy him breakfast, or better still, a few beers if we can find a bar that's open."

Not long after the Boston shenanigans, Aurel told Ottawa sports columnist Earl McRae he'd like to make a comeback in the NHL. "If a team made me the right offer I'd come back," he said straight-faced. "I'd show 'em."

"How long do you think you'd last out there?" McRae asked.

"Only five minutes a game?"

60 years after Aurel played in the opening game at the Montreal Forum, he was invited back as an honorary member of the Canadiens' "dream team". Then aged 83, he delighted the fans with a display of vigorous skating and stickhandling. He even took a couple of pratfalls, one of them caused by the red carpet laid on the ice. "The ghost of Eddie Shore must have put that damn rug in front of me," he would mutter.

The "Little Giant", one of hockey's biggest Legends and one of its most colorful players ever, passed away on June 2, 1986 at the age of 84.