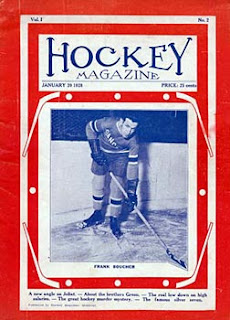 Often considered to be the Wayne Gretzky of his day because of his superior playmaking skills and understanding of the game, Frank Boucher had the gentility, class and manners rarely matched at such an elite level. In a game that is enthralled by it's violent behavior, Boucher won the Lady Byng Trophy, emblematic of gentlemanly play and excellence, 7 times from 1928-1935. In fact in 1935 he was given the trophy to keep, and a second trophy was created to give to the annual winner.

Barely standing 5'9" and weighing a mere 135lbs, he was strong and sleek on his skates. He was a genius of a puck handler, with this uncanny ability of drawing defenders to him while the his linemates Bill and Bun Cook raced to open holes. Selflessly, and almost without fail, he would thread the puck through defenders, right on to the stick! He was truly the balance wheel on arguably hockey's best line. He also was credited for perfecting the drop pass so common in today's game.

He debuted in 1921-22 in the NHL with the Ottawa Senators. A native of Ottawa, Boucher grew up playing hockey from dawn to dark on the frozen Rideau River. It was at this early age that he developed his meticulously clean style of play, emulating the great Frank Nighbor - his idol. But soon his hockey journey moved him out to the Vancouver Maroons of the PCHA where he starred for 4 years in the NHL calibre league.

Feathering pucks masterfully to the Cooks in a Gretzky-like fashion, "Raffles" led the league in assists three times. While it is tough for a modern fan to comprehend just how impressive Boucher's statistics were, Total Hockey once did an interesting study to translate old scoring totals into modern times. The study really puts Boucher's brilliance into perspective. In his first 5 seasons Boucher would have scored 100 assists! In fact, Boucher's league leading 16 assists in the assist-rare 1928-29 season would translate into 151 assists today! And in Boucher's first 4 seasons Boucher would have averaged about 175 adjusted point! In total, Boucher's adjusted career totals would have been 401 goals, 1000 assists and 1401 points!

Of course such studies are fun though flawed and in the end interesting but useless. Frank's real career totals with 160 goals, 263 assists, and 423 points in 557 games. What no statistic or study will ever reflect would be the true artistry of this great hockeyist. When modern fans compare Wayne Gretzky to Frank Boucher, the compliment is very telling of just how good Frank was!

While best known as a player, it should be noted Boucher later coached the Rangers and captured the Stanley Cup in his first season as a coach. His coaching record isn't great as his team was decimated by War and struggled for years to regain elite status. Boucher's biggest problem was he never had a player as good as he was. He was an innovative coach. He developed the now common box penalty kill formation. He also was the first coach to pull his goaltender for an extra attacker.

Its really too bad that only the old timers got to witness Frank Boucher, as he'd be one of the all time greats if he played post WWII. One of the old-timers that did really respect Boucher's skills was legendary broadcaster Foster Hewitt. While broadcasting the 1972 Summit Series in 1972, the highly skilled Soviets reminded Hewitt of Boucher.

"There aren't many people around to remember" Hewitt said, even 30 years ago. "but the way the Russians play reminds me of the old Rangers, especially the line of Boucher and the Cooks. They were even better than the Russians. When Frank, Bill and Bunny were on the ice, it always seemed to me they had the puck on the string."
at April 06, 2006