Bill Durnan had a short but absolutely brilliant career with the Montreal Canadiens. 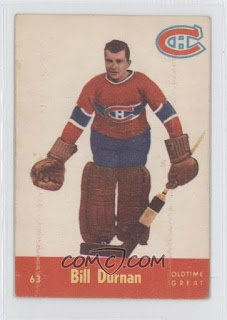 Durnan had a very peculiar trait that helped him excel: he was ambidextrous. Instead of wearing a blocker, he'd wear gloves on both hands. He would then switch which hand he used to hold the stick depending on which side of the rink the opposition was attacking from. Thus, the shooter would always be facing his big glove. He became known as Dr. Strange-Glove.

It wasn't a natural thing for Durnan though. A natural rightie, he worked very hard at it under the tutelage of coach Steve Faulkner.

"His idea of switching the stick hand really impressed me when I played against better teams, since the goalie always keeps his catching hand out toward the big part of the net," said Durnan. "At first it felt as though I was transferring a telephone pole from one hand to the other, but after a while I'd hardly realize I was doing it. Soon I noticed the opposition was unaware that I was switching hands, and later on when I was in the NHL it often took years before the other guys knew I was ambidextrous."

Durnan was originally property of the Toronto Maple Leafs, but he was released because of a bad injury. As a result, Durnan was devastated and basically gave up.

"When the Leafs found out about my injury they dropped me and I vowed that even when I got better never would I play pro hockey. I was disillusioned and figured if that was the kind of treatment I was to get, then hell, I didn't want any part of it.

Besides, there wasn't much money involved; in those days they weren't paying anywhere near the money to be had today. So, I quit altogether. Playing in the NHL was about as far from my mind as swimming on Mars."

Durnan moved to Kirkland Lake and got a job at the local gold mining mill and played senior hockey with the local Blue Devils. After 4 years which included the 1940 Allan Cup championship, Durnan moved to Montreal where he took a job in the accounting department of Canadian Car and Foundry Company, and at the same time played goal for the Montreal Royals in the QSHL.

"My boss was Len Peto, who was also a director with the Canadiens and a man who knew his hockey. I hadn't given the NHL a second thought, that incident with the Leafs was still sharp in my mind and I never wanted to go pro. Money wasn't a problem any more, I had a good job and was making a little extra from the Royals, so everything was just fine when Peto started pressuring me to sign with the Canadiens."

At this time Durnan was 28 years old, and about to finally embark upon his NHL career.

"I wasn't ordered to sign, but there's no question that some stress was put on me, which I resisted at first. Somehow I managed to hold out until the day of the opening game and got the Canadiens management to give into my wishes. I signed for the huge sum of $4200 and found myself on a hockey team just beginning to gel."

Gel they did, Rocket Richard was just coming into his own, and line mates Toe Blake and Elmer Lach were incredible, as was defenseman Butch Bouchard. And Durnan was a big part of the Habs success.

Although his career lasted only 7 seasons, it was long enough to earn him top consideration as perhaps the greatest goalie in hockey history. He won the Vezina trophy in his rookie season, and would win the Vezina every year he played in the league except one. He was a 6 time First Team All Star and led the Habs to two Stanley Cup championships.

In 1949 he set the modern record for consecutive shutouts with 4, as he played over 309 minutes of NHL action without surrendering a goal. The record stood until Brian Boucher broke it in 2004.

Durnan left the game he loved because of the pressures involved in tending the net.

"Hockey started to get rough for me at the end of the 40's. I had broken my hand and after it mended it felt as if my arm was falling off whenever I'd catch the puck," said Durnan. "One of my main reasons for chucking it all was because the fun was going out of the game for me. A lot of my old pals were leaving - or had gone - and much of the camaraderie was missing."

Durnan also cited the money as a reason he got out of hockey.

"My reflexes had gotten a little slow and, besides, the money wasn't really that good. I'll admit, if they were paying the kind of money goaltenders get today, they'd have had to shoot me to get me out of the game! But at the end of any given season when I was playing I never seemed to have more than $2000 in the bank, so I wasn't really getting anywhere that way. I wasn't educated and I had two girls to raise."

Things came to a head in the 1950 playoffs against the New York Rangers however. The Rangers were on the verge of an upset when they had the Habs on the brink of elimination 3 games to 1. Durnan pulled himself from the series.

"I was afraid I was blowing things. I really wasn't, I guess, but we hadn't won a game and I didn't want to be blamed for it. And I felt I wasn't playing as well as I did in the past.. The nerves and all the accompanying crap were built up. It was the culmination of a lot of thinking and I realized 'What the hell, I'm quitting and this is as good as time as any'"

Gerry McNeil stepped in and finished the playoffs.

"A lot of people thought it was a nervous breakdown but it wasn't. To this day, people still won't believe me."

Durnan is often forgotten about when it comes to discussing the game's greatest goaltenders. Sawchuk, Hall, Plante, Dryden, Hasek and Roy usually do, but not Durnan. Perhaps if he had been professional a little longer in his career he would have gotten the credit that is due.
at April 04, 2006