Alright, back to looking back on the careers of the recently retired. Today we look at Hockey Hall of Fame lock Duncan Keith 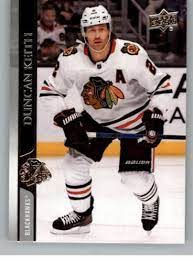 Duncan Keith, a 17 year NHL veteran, was one of the best defensemen of his generation. His dynamic skating defined by elite lateral agility allowed Keith to be a true workhorse defender, always near the top of the league in terms of ice time. He had fantastic offensive instincts, often pinching or jumping into the play. He had great offensive creativity and a lively shot. I think my favorite aspect of Keith's game was his feisty and spirited physical game. He played with an aggressiveness - an almost reckless abandon - that belied his modest frame.

Obviously that 2010 season was one of the all time great efforts by a NHL defenseman. Stanley Cup, Olympic gold, Norris Trophy. That's pretty hard to top.