Trying To Figure Out What Made Wayne Gretzky So Good

"A lot of people came to watch Gretzky play. So did the Maple Leafs."
- Leafs coach Joe Crozier 1980 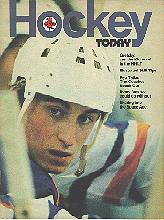 "He does and has done things at a superstar level and pace even though he appears to be badly equipped in most areas, starting with a scrawny physique worthy of a turkey-in-the-straw description. It doesn't appear that he was either the speed or staying power called for at the NHL level," Fisher wrote.

There were lots of dismissive experts back then, even though Gretzky, in his second year in the league was the reigning Hart Trophy winner and the highest scorer in the league since he debuted.

"He's the original Mr. No . . . until his accomplishments are studied. This, after all, is a youngster who scored 51 goals with a 16th place team (in a 21 team league) in his rookie season. Guy Lafleur needed two and a half seasons to match the 137 points Gretzky scored in his first. And it wasn't until Lafleur's fourth season that he scored more than 50 goals.

"What, then does Gretzky have?" questioned Fisher.

He polled the NHL players to find out.

"He's smart. He's as smart a player as there is in the league," said Bobby Clarke. "And he's a lot quicker than he appears to be."

Clarke added, "They tell me a test was made during the season and they found that he's got 30 per cent better peripheral vision than anyone. I mean, here's a kid who isn't big, who doesn't look like he's skating very fast, and nobody seems to catch him. Nobody can hit him. I mus have something do with how quickly he sees the puck."

"The uncanny thing I find about his game," continued Clarke, one of the best defensive centermen in the game, "is the way he can spin and take off. He does that faster and quicker than anybody I've ever seen. I've heard a lot of people talk about his skating. They say he doesn't seem to have the skating strength, but anybody who scores 137 points has to be able to skate...and skate very well."

"Smart. That's the first word that comes to mind when I see him. Very smart. He knows what he's doing every time he's on the ice. Do you see what he does with the puck behind the net?" said Arbour in amazement. 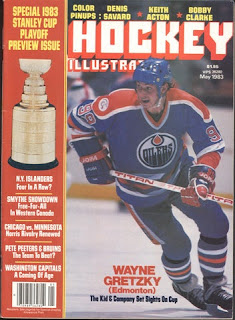 Fisher also asked Gretzky's own coach, Glen Sather. He didn't talk about any skill set at all, just his hard work.

"That's the great thing about him. A lot of guys give up, but not this kid. He keeps going at until the game is over. He never figures it's over until there's no time left. We had a lot of goals scored against us during the year. We scored a lot, too. But it didn't matter whether we were down by three or four or ahead by one or two. you can never tell from the way this kid is playing. With others, yes. With Gretzky, no. That's the one thing that makes him so different."

"The biggest thing about him is that he makes goal scorers out of anybody who plays on his line. He had a kid with him in the WHA during the second half of the season. At Christmas time, when the kid was put on his line, he had three goals. After he joined Gretzky, he scored about 25 more. That has to tell you something about Gretzky.

When Fisher ask Risebrough if Gretzky could make a goal scorer out him, he grunted "That would be the ultimate test."