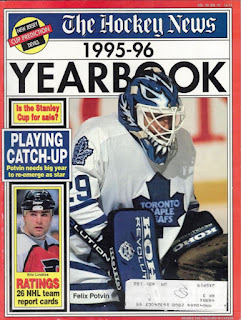 Felix Potvin was one of the first of seemingly countless great Quebecois puck stoppers to follow in the footsteps of Patrick Roy. Judging by his junior career, Potvin would be the next Roy and perhaps better! He was born and raised in Montreal but was never a Habs fan. He liked the Quebec Nordiques better, but liked Billy Smith and the New York Islanders best of all. He led the QMJHL in shutouts three straight seasons. His final year he was named as the Canadian major junior goaltender of the year after backstopping Chicoutimi to the Memorial Cup finals. He also earned a gold medal at the World Junior championships.The Leafs were pleasantly surprised to see Potvin still available in the second round of the deep 1990 NHL entry draft. Ht Leafs grabbed him with 31st overall pick. After a year of learning English and successful of apprenticeship in the American Hockey League (he was named as the top rookie, top goalie and first team all star) Felix made the move to Toronto in 1992-93.Potvin took the NHL by storm once he arrived. In his rookie season Potvin led the league in goals against average with a 2.50 mark, and backstopped the Leafs not only to their first true mark of respectability since the 1970s, but to playoff success. Potvin was brilliant as the Leafs went on a magical playoff run, only to fall short in a 7 game conference finals against Wayne Gretzky's Los Angeles Kings. Had the Leafs been successful, the Stanley Cup would have been a classic showdown - Leafs vs. Habs, Potvin vs. Roy.