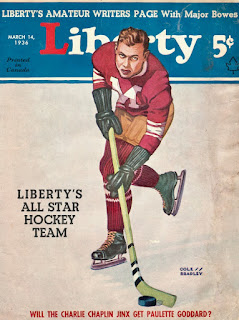 This is the March 14, 1936 edition of Liberty magazine. It features a generic Montreal Maroons player on the cover.

Here's who they came up with:

Defense: Eddie Shore of the Boston Bruins and Ching Johnson of the New York Rangers

Left Wing: Paul Thompson of the Chicago Black Hawks or Busher Jackson of the Toronto Maple Leafs. They should have used a shoot out to decide ties.