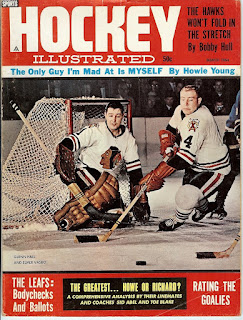 Hockey players, especially goaltenders, have pre-game rituals. Some are more unusual than others. But no one had a stranger ritual than former NHL goaltending great Glenn Hall who, because of nerves, would literally become physically ill while waiting the start of a game.More often than not, before the first face-off, during the rest periods or after the game was concluded, Glenn quietly and unobtrusively would throw up ."I always felt I played better if I was physically sick before the game. If I wasn't sick, I felt I hadn't done everything I could to try to win," Hall once said.It obviously worked for Hall, as the man nicknamed "Mr. Goalie" has to be considered a prime candidate as the greatest goalie ever played.