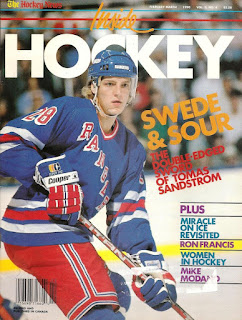 Tomas Sandstrom was one of the most hated players of his day.He had a reputation as a shit disturber at best, and as a dirty player at worst. He was very abrasive, always yapping, giving facials with his gloves and keep his stick high whenever someone came nearby. He infuriated opponents regularly enough that they would often try to retaliate, allowing Sandstrom's team to go to the power play. Once in a while they got him good, like, infamously, Dave Brown.

Sandstrom had the finesse skills to make that team pay, too. He combined good size, speed, strength and skill. Nine times in his career, including seven seasons in a row, Sandstrom topped 25 goals or more, including a couple of 40 goal campaigns. He surprised goalies with virtually no backswing to his shot, showing velocity and accuracy regardless. He could even release shots while the puck was still in his feet. He was also an underrated passer.

Despite his reputation as a dirty player, the bottom line on Tomas Sandstrom was that he loved to compete and you had to respect that.
Full Tomas Sandstrom Biography
at October 08, 2021