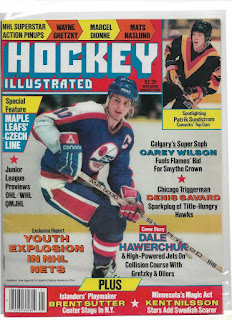 In nine seasons with Winnipeg, Dale Hawerchuk established himself as one of the NHL’s premier forwards. He led the team in scoring in each of his nine years in Winnipeg and broke the 100-point barrier six times. Seven times he scored more than 40 goals. During the 1984-85 season, he established career highs in goals (53) and points (130) while finishing second in the voting for the Hart Memorial Trophy as the NHL’s Most Valuable Player.Hawerchuk was a joy to watch. He was an excellent though not smooth skater, deceptively fast and blessed with great lateral agility. He had the rare ability to handle the puck and create plays even at top speed. A tremendous one on one player, Hawerchuk learned not to over handle the puck and became a great playmaker as well as a goal scorer, particularly on the power play.However Hawerchuk and the Jets were never able to find post seasons success. That is largely due to the fact that they were in the same division as the powerhouse Edmonton and Calgary teams. The Jets just didn't have the depth to escape the Smythe division.