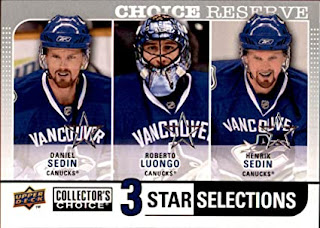 The 2021 class featured a comparatively weak first year eligible group of Henrik and Daniel Sedin and Henrik Zetterberg. Caroline Ouellette would have been a lock on the women's side.

Canucks fans were certainly looking forward to the Sedins' inclusion. It's not a matter of if, but of when. A first year induction would have been a fantastic honour.

Roberto Luongo was going to headline the list of first year eligible players in 2022. It will be a great nod to the three superstars of the Canucks most successful era to have all three being inducted at the same time.

A 2022 class of Luongo, Sedins and Zetterberg is the most likely scenario in my mind. Patrick Sharp, Rick Nash, Cam Ward, Dion Phaneuf, Niklas Kronwall and Chris Kunitz are long shots at best.

There is always the usual suspects on the holdover list, guys like Alex Mogilny, Daniel Alfredsson, Jeremy Roenick and, oh hey this would more nice symmetry, Markus Naslund. There could be room for some of them too as the Hockey Hall of Fame has plenty of time to decide if they will increase the allowable amount of inductees for 2022 given the missed class of 2021.