It is very safe to say that Bernie Morris is one of the long forgotten greats in Stanley Cup history.
Bernie who?
Exactly. 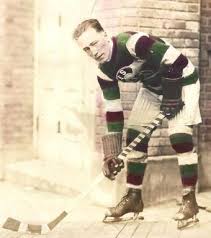 This is Bernie Morris. The Manitoban native is a long forgotten Stanley Cup hero and part of America's first great hockey team.
Did you know the first American based team to win the Stanley Cup was the Seattle Metropolitans? Representing the Pacific Coast Hockey Association, the western equal of the NHL back then, the Mets won it in 1917, defeating the Montreal Canadiens 3 games to 1 (best of five final).
The star of the Seattle Mets was Morris. Morris would have been the obvious choice as Stanley Cup MVP had they had such an award back then. He led all contestants with 14 goals in the 4 game series, including 6 goals in game 3.
The versatile all star forward was the fan favorite in Seattle, starring there from 1916 through 1923. He did miss much of two seasons due to World War I. He did not serve with the military, which was exactly the problem. Morris, a Canadian born in Brandon, Manitoba, missed remainder of 1918-19 and majority of 1919-20 seasons after being charged for Draft Evasion by U.S. authorities, on March 16, 1918. His summons came to his address in Seattle with just six days left in World War I, but he wasn't home to set the record straight as he was working his off-season in remote Northern British Columbia. He was sentenced to serve time on Alcatraz Island, though it is unclear if he ever went there. All charges were eventually dropped in 1920. Bizarre.Morris returned to the ice but was never quite the same. After a couple of seasons back with Seattle he moved to Calgary to play with the Tigers before bouncing around a few leagues and cities. He did play 6 games with the Boston Bruins (scoring 1 goal and 1 assist) in 1925. That would be his only taste of NHL action.
Morris returned to the Seattle area and became a turkey farmer after hanging up his skates.
It could be argued that Morris is the greatest hockey player in Seattle hockey history. Perhaps Frank Foyston, or Jim Riley, or Hap Holmes, or Bobby Rowe or Jack Walker?
I know. All these guys have long been forgotten by hockey. The Seattle Metropolitans have been forgotten too, but that is changing with the coming arrival of the NHL's newest team - the Seattle Kraken.
With that in mind, I am announcing the Seattle Project. I will return to profiling hockey players from the past - something I have gotten away from after compiling 3000+ player biographies here at Greatest Hockey Legends. I will specifically be looking to bring back the memories of Seattle's hockey past.
at August 07, 2020