57 years old is just far too young to die. Having recently celebrated my 46th birthday, this point seems to hit home more and more the older I get.

57 is how old Dale Hawerchuk was. His death was announced today, August 18th, 2020. It was recently announced that the vicious stomach cancer he had been fighting had returned. His demise was quick and sad.

At one time Hawerchuk, to me anyway, seemed the invincible leader of the 1980s Winnipeg Jets. Invincible to everyone but Wayne Gretzky's Oilers I guess.

Hawerchuk was a legendary junior hockey player who went on to even bigger things in the National Hockey League and in international competitions. It is no wonder why he is a deserving member of the Hockey Hall of Fame. 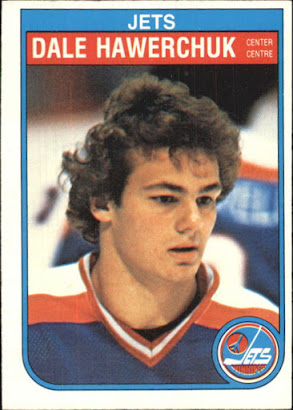 As a junior player, he was named to the QMJHL First All-Star team after the 1980-81 season and was named the Canadian Major Junior Player of the Year. That year he played in all 72 games and scored a ridiculous 81 goals, 102 assists for 183 points! He led Cornwall of the Quebec Major Junior Hockey League to consecutive Memorial Cup Championships (1980 and 1981) and won the Stafford Smythe Memorial Trophy as the Memorial Cup Tournament MVP in 1981.Hawerchuk was the Winnipeg Jets’ first round choice (first overall) in the 1981 Entry Draft. He made an immediate impression with the Jets as he was the first NHL rookie to record 40 goals and 100 points in the same season finishing with 45 goals and 103 points in 1981-82. Following the season, he won the Calder Memorial Trophy as the NHL Rookie of the Year, beating out a great young goalie in Edmonton named Grant Fuhr.In nine seasons with Winnipeg, Hawerchuk established himself as one of the NHL’s premier forwards. He led the team in scoring in each of his nine years in Winnipeg and broke the 100-point barrier six times. Seven times he scored more than 40 goals. During the 1984-85 season, he established career highs in goals (53) and points (130) while finishing second in the voting for the Hart Memorial Trophy as the NHL’s Most Valuable Player.Hawerchuk was a joy to watch. He was an excellent though not smooth skater, deceptively fast and blessed with great lateral agility. He had the rare ability to handle the puck and create plays even at top speed. A tremendous one on one player, Hawerchuk learned not to over handle the puck and became a great playmaker as well as a goal scorer, particularly on the power play.However Hawerchuk and the Jets were never able to find post seasons success. That is largely due to the fact that they were in the same division as the powerhouse Edmonton and Calgary teams. The Jets just didn't have the depth to escape the Smythe division. 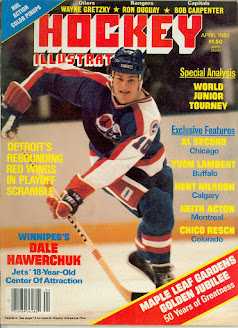 While Hawerchuk never tasted NHL post season highs, he did experience some great moments in international hockey. He was a member of the 1982, 1986 and 1989 Team Canada at the World Championships. He represented the NHL All Stars at Rendez Vous 1987 and most importantly was a big part of two Canada Cup championship teams - in 1987 and 1991. Dale's role in 1987 in particular is looked upon as one of the greatest examples of gamesmanship in hockey history. Dale was a high scoring superstar in the NHL, but at this level he graciously accepted a lesser role and became more of a gritty checker. That selflessness played a big role in Canada's victories, and in the maturing of Dale Hawerchuk into a complete hockey player.As the 1980s wound down, Hawerchuk's offensive contributions were slowing as well. Coming off of his great 1987 Canada Cup performance, Dale scored the second best numbers in his career - 121 points thanks to 44 goals and 77 assists. He dipped down to a still very impressive 96 points in 1988-89, but in 1989-90 Dale had his worst offensive year in his career. 26 goals and 81 points in 79 games sounds like a career year for most players but for Dale those were his worst numbers in Winnipeg. The Jets were concerned that his play was in recession, and after a decade of brilliance, they still had not accomplished anything in the playoffs.Jets management decided it was time for a change, and prior to the 1990-91 season, Hawerchuk was traded to the Buffalo Sabres in a draft day blockbuster that saw Phil Housley go to Winnipeg. In his first season in Buffalo, he scored 31 goals and 89 points and recorded his 1,000th NHL point during the campaign. He played a strong second line role behind Pat Lafontaine - combining his great playmaking with his gritty defensive game he discovered while in the Canada Cup. However post season success would not happen in Buffalo either, due to untimely Sabres injuries almost every playoff season.Dale would play in 5 seasons in Buffalo. His terrific passing game keyed the Sabres power play from the point for most of his time in New York state. In 5 seasons in Buffalo (including the lockout shortened 1994-95 season) Dale scored 110 goals, 265 assists for 375 points in 323 contests. His intelligent and shifty game made him a fan favourite.Hawerchuk signed with the St. Louis Blues as a free agent on July 8, 1995. He played in 66 games for the Blues in 1995-96 before being traded to Philadelphia in exchange for Craig MacTavish.Dale played in his first and only Stanley Cup final in 1997, yet he and his Philadelphia Flyer's came up short against the Red Wings. Dale played admirably in that series, and you couldn't help but route for him even if you weren't a Flyers fan.Injuries forced Dale Hawerchuk to retire earlier than anyone wanted him to. His high scoring days were behind him but he was still a joy to watch.Hawerchuk has played in 1,188 NHL games over 16 years with Winnipeg, Buffalo, St. Louis and Philadelphia. He has registered 518 goals and 891 assists, which ranked him at the time of his retirement 21st all-time in goals, and 10th in both assists and points.Dale was elected to the Hockey Hall of Fame in 2001. He was named as on the NHL's Top 100 Players of All Time in 2017.
at August 18, 2020