Another Gretsky? And This Time It's Spelled Right

In my 45 years as a sports fan, I have never seen an athlete quite like Wayne Gretzky. His name is synonymous with greatness, dominance and classiness unlike almost any athlete in any sport.

For an athlete of such rare stature, his name is also frequently misspelled. Heck, he even played a game with the New York Rangers with his GRETKZY emblazoned on his jersey. You'd think everyone would have had his name down by that late stage of his career.

But by far the most common misspelling was GRETSKY. And it drove me nuts. I'd see fellow elementary school classmates spell it that way. Often with the S backwards to top it all off.

But I would often see it in newspaper articles and I have even seen it in early 1980s book spelled Gretsky. I assume these authors wrote the original manuscript in crayon and good copy-editing caught the backwards S.

So now, 20 years after he left the ice, Wayne Gretzky is one of the most celebrated athletes ever. And, much to my amazement, it seems everyone knows how to properly spell his name.

Then comes this news from ESPN: 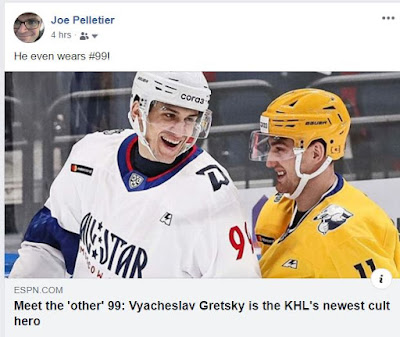 That's right. There another Gretzky in hockey. Only now the spelling GRETSKY is correct!

It seems this Gretsky, not unlike Wayne's brother Brent who briefly played for the expansion Tampa Bay Lightning, is more there as a publicity stunt than as a true hockey prospect. He's a 23 year old rookie in the KHL. He hadn't scored a single point in his eight games played, but fans love the name and voted him in to the KHL All Star Game.

Do read the ESPN article on Slava Gretsky, the "other" 99. It's a fantastic read. Even Wayne loves the story and is rooting for the kid. He talks about his family origins back to Belarus and wonders if he might actually be related to the newest KHL celebrity. Wayne also talks about how the name Gretsky became Gretzky when the family first came to North America.