Is Patrick Kane The Greatest Chicago Blackhawks Player Ever?

Is Patrick Kane the greatest Chicago Blackhawks player ever? 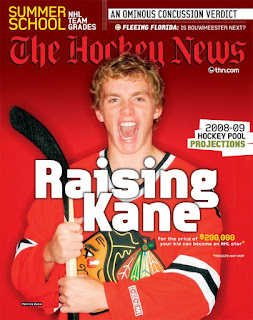 That's the question Ken Campbell of The Hockey News has posed. And he may be right.

My initial reaction was "No way!" How can he be better than the legendary Bobby Hull or, the player I consider to be the best Hawks player of all time, Stan Mikita.  After a bit more thought, Pierre Pilote's name should also be listed.

But then I started thinking about the other great Hawks. Denis Savard - oh what a wonderfully comparable player for Kane. Both have so much sizzle, but Kane has those Stanley Cups. Keith Magnuson - a proud Hawk but ultimately not a truly great player. Doug Bentley? Bill Mosienko? Charlie Gardiner? All have legitimate cases, but at some point we have to draw the line between the modern era and golden days.

Bottom line - it seems crazy to suggest any Hawks player will ever be better than Bobby Hull or Stan Mikita. But maybe Campbell is right and Kane has a really good case. I'm not sure where I sit on this one, but I'm open to it. Let's let Kane finish his career first.

Kane is a great Hawks player, no doubt, but not THE GREATEST. Here are my top 10 in order.