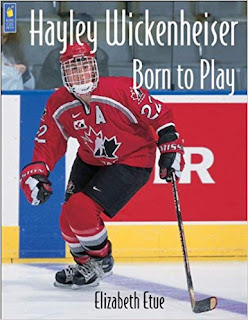 Did you know that Hayley Wickenheiser is the only the first year eligible player entering the Hockey Hall of Fame in 2019?

That says about all you need to know about Wickenheiser's importance to the game. The Hall of Fame has unintentionally created two classes of Hall of Famers - those who get in right away, and those who have to wait a while.

Those who get in right away are the true legends of the game. And Wickenheiser most certainly is that.

Here's more from the CBC:

Hayley Wickenheiser 'Changed The Game' On Way To Hockey Hall of Fame: CBC

Not bad for a girl who used to slink into the arena, hoping to go unnoticed, to play a game that belonged, at the time, to boys and men.

"I remember having a lot of anxiety going to the rink," says Wickenheiser, 41. "I didn't want to deal with people going, 'Oh, there's the girl.'"

Wickenheiser after receiving her Hall of Fame ring on Friday in Toronto. (Getty Images) In terms of getting into her hockey gear, she said, "I was a home-changer, or I would change in a bathroom stall or wherever they would put me. I had a lot of stress." With her hair cut short to avoid detection, she routinely hustled to the dressing room to join the boys on her team — pretending to not hear the verbal barbs along the way.

"When I got on the ice, I felt free, because no one could touch me there," she says. "It was my safe place. I felt like I was good. I belonged."

Did she ever — much to the chagrin of some parents of kids on the opposing teams.

"I think it was a lot of abuse because I was a good player from a young age," she says. "So I did attract a lot of attention to myself. I heard and saw a lot of stuff that I would hope today a little girl playing with boys wouldn't have to go through."