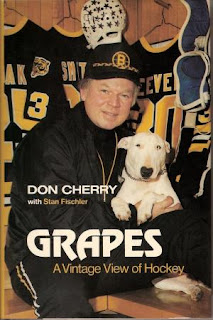 The inevitable happened over the past weekend. The most shocking thing probably is that it took so long.

Don Cherry was fired from Hockey Night In Canada for making controversial statements. The possibility of firing him has probably happened more than a few times over his 30 years with CBC/Rogers. He has said a lot worse.

I suspect Rogers was thrilled that "Grapes" finally tripped up this season. The network has been cutting great talent because of the enormous weight of their budget due to the NHL contract. Bob McCown, John Shannon, Nick Kypreos, Darren Millard are but a few who have been let go recently. Long time mainstays who were good at their job, but were casualties of the budget.

It is presumed that Cherry made more than all of them. Probably significantly more.The problem was Rogers couldn't cut Cherry. His Coach's Corner segment was the biggest draw for the network. Even at his price tag, he made them money. For all that is wrong with Cherry, people watched and he made his network a lot of money.

Rogers couldn't justify cutting Cherry until he screwed up. Perhaps it was the Coach's Corner sponsor, Budweiser, that made the final call? Perhaps it was Roger's convenient out? We may never know.

Now he is 85 years old. He could just call it quits and not care anymore. Or he could reappear, likely next season, and be a force. Does TSN give him a spot somewhere, knowing it would be a ratings killer? Or does Cherry hire someone to help him become a social media star. He could be very popular on YouTube.

Many people are gleefully dumping on Cherry this week. For what happened on the weekend is rightful. But his many enemies are dumping on him mostly just for being Don Cherry, the only man who became bigger than Hockey Night in Canada.

Somehow I think we have not heard the last from Don Cherry yet.
at November 12, 2019